"Review for Everyone Else

The Apple iPad is basically a gigantic iPod Touch.

The simple act of making the multitouch screen bigger changes the whole experience. Maps become real maps, like the paper ones. You see your e-mail inbox and the open message simultaneously. Driving simulators fill more of your field of view, closer to a windshield than a keyhole.

The new iBooks e-reader app is filled with endearing grace notes. For example, when you turn a page, the animated page edge actually follows your finger’s position and speed as it curls, just like a paper page. Font, size and brightness controls appear when you tap. Tap a word to get a dictionary definition, bookmark your spot or look it up on Google or Wikipedia. There’s even a rotation-lock switch on the edge of the iPad so you can read in bed on your side without fear that the image will rotate.

If you have the cellular model, you can buy AT&T service so you can get online anywhere. (Cellular iPads aren’t available until next month; I tested a Wi-Fi-only model.)

But how’s this for a rare deal from a cell company: there’s no contract. By tapping a button in Settings, you can order up a month of unlimited cellular Internet service for $30. Or pay $15 for 250 megabytes of Internet data; when it runs out, you can either buy another 250 megs, or just upgrade to the unlimited plan for the month. Either way, you can cancel and rejoin as often as you want — just March, July and November, for example — without penalty. The other carriers are probably cursing AT&T’s name for setting this precedent.

The iPad’s killer app, though, is killer apps. Apple says that 150,000 existing iPhone apps run on the iPad. They either appear actual size — small and dead center on the screen — or, with a tap, doubled to fill the screen, a little blurry. Still, all the greats work this way: Dragon Dictation, Skype (even voice calls, through its speaker and microphone) and those gazillion games.

But the real fun begins when you try the apps that were specially designed for the iPad’s bigger screen. (When the iPad section of the App Store opens Saturday, it will start with 1,000 of them.)

That Scrabble app shows the whole board without your zooming or panning: a free companion app for your iPhone or Touch is called Tile Rack; it lets you fiddle with your letters in private, then flick them wirelessly onto the iPad’s screen. Newspaper apps will reproduce the layout, photos and colors of a real newspaper. The Marvel comic-book app is brilliant in its vividness and panel-by-panel navigation. (Oops, maybe that app belongs in the review for techies.)

Hulu.com, the Web’s headquarters for free hit TV shows, won’t confirm the talk that it’s working on an iPad app, but wow — can you imagine? A thin, flat, cordless, bottomless source of free, great TV shows, in your bag or on the bedside table?

Speaking of video: Apple asserts that the iPad runs 10 hours on a charge of its nonremovable battery — but we all know you can’t trust the manufacturer. And sure enough, in my own test, the iPad played movies continuously from 7:30 a.m. to 7:53 p.m. — more than 12 hours. That’s four times as long as a typical laptop or portable DVD player." 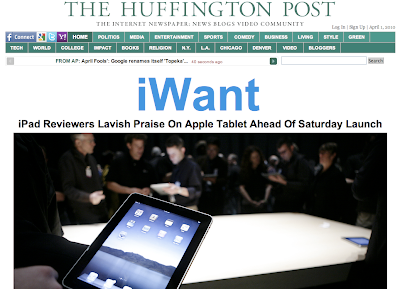