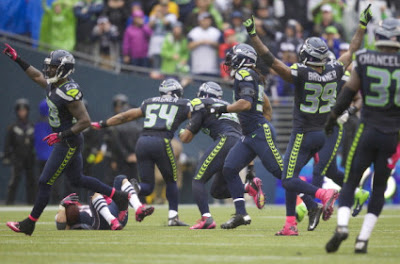 The Seattle defenders are remarkable in being a collection of late draft picks and castoffs. Only safety Earl Thomas was a first-round choice by the team he now plays for. Defensive end Chris Clemons was let go by three teams; his understudy Michael Bennett, who started against San Francisco, was undrafted and let go twice. Browner was undrafted, and played in Canada. Linebacker Malcolm Smith was a seventh-round pick, safety Kam Chancellor a fifth-round selection. Unlike teams with lots of high-drafted defenders who spend their time complaining, Seattle has lots of hand-me-downs who spend their time working. That is a classic approach to success, and classic never goes out of style."
Posted by Eric at 8:50 PM