The Meaning Behind Black Hawk Down 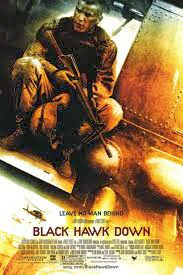 "Only the dead know an end to war,” reads the Plato quote at the beginning of Scott’s 2001 film. The living? They have to get up and go to work every day, which is its own kind of hell.

Ridley Scott’s adaptation of Mark Bowden’s 1999 nonfiction account of the 1993 Battle of Mogadishu was released into a very different world than the one in which it was made. Hitting theaters in December '01, it was an unintentional post-9/11 movie and, in that sense, it has always been a difficult film to parse: It’s an elaborate, complex story told under a near-constant barrage of automatic-weapon fire. You're left a little confused about what exactly Scott is trying to say about war. Maybe that’s because it’s not really a war movie at all.

Black Hawk Down is actually a workplace drama. The film came out three years after Saving Private Ryan, and in terms of viscerally rendering battle onscreen, that’s its only equal. But where Saving was about the greatest generation and featured recognizable movie stars fighting against a real and obvious enemy, sacrificing their lives for something bigger, Scott takes the world’s best-trained soldiers — Navy SEALs, Army Rangers, Delta Force, Special Ops — and turns them into working stiffs, assembling a huge cast of bright young things and making them indistinguishable from one another (and that’s before they put on matching helmets and goggles).

Want that fun scene in which you find out where everyone’s from? Nope. Want to know who the “explosives guy” is, who the “wild card” is, and who the corn-fed guy from Iowa who could win the war if they only let him fight with his fists is? Wrong movie. Here we have — deep breath — Josh Hartnett, Ewan McGregor, Ewen Bremner (that’s half of a Trainspotting reunion!), Orlando Bloom, Eric Bana, Tom Sizemore, William Fichtner, Jeremy Piven, Hugh Dancy, Ron Eldard, Tom Hardy, Ty Burrell, Danny Hoch, Brendan Sexton III (though his part was cut down, allegedly for political-messaging reasons), Nikolaj Coster-Waldau (The Kingslayer!), and Ioan Gruffudd ... half of whom you had no idea were in this movie because there are probably three dozen speaking parts and aside from Bana, McGregor, Hartnett, Sizemore, and Sam Shepard it’s basically impossible to know who is talking and what they’re talking about.

Scott could have populated a "Young Hollywood" photo shoot with this cast, but instead he makes them look like drones. Not the military kind, but anonymous, working schmoes. They’re even wearing khakis (OK, desert camouflage, but it’s close). They all look the same, talk the same, and many of them have the same ambivalent trepidation about what they’re doing with their lives and the reasons they’re doing it.

For the first 40 minutes of this film — until Bloom’s Blackburn character falls from a helicopter, triggering a series of disastrous encounters between American military and Somali militia — this film isn’t about how modern war is hell as much as it’s about how modern work is hell.

Cafeteria lines are cut by alpha males, clerical errors are made, data entry is performed, people gripe about hours, food, and benefits, and boredom reigns. Everybody looks the same, everybody talks the same, and the fight they are there to have is treated in the same clinical way as an endless game of Scrabble. Everything is a distraction from the malaise of committing your life to your work."
Posted by Eric at 1:36 PM