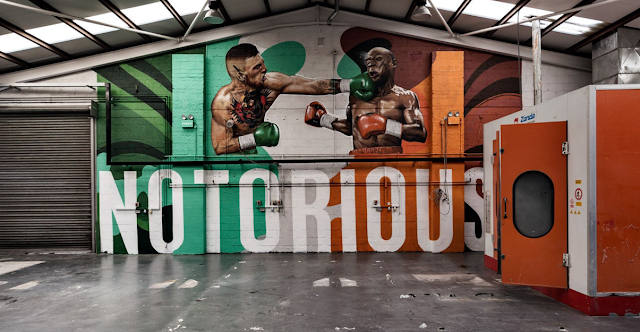 
""Have you ever cornered a boxing fight?" Kavanagh asks.

"Neither have I," Kavanagh says. "Never been in a corner, amateur or pro."

"I kept meaning to do it," Kavanagh says.

When he got a text message from Conor saying the fight was a go -- it arrived at 6:10 on a Wednesday night, June 14 -- he realized he didn't have a place for a boxer to train. There were only four days to create one. He called the owner of the strip mall that houses his gym and asked about borrowing an abandoned car dealership down at the end. He got the keys and began cleaning. They hung a sheet between the showroom and the repair bays and set up the gym in the back. John got racks built for the bags. He traded favors to get an electrician to turn on the power. A plumber got the water running and installed a shower. He found a competition boxing ring out of England and had it brought to Ireland on a ferry. Finally, because managing Conor's mind is so important, he got the guys from a local art collective named Subset to do a graffiti-style mural on the wall of Conor hitting Mayweather. The artists laughed the first time they saw the space, wondering what Floyd's gym must look like, making jokes about Rocky training in the snow. The mural got painted freehand in one 12-hour burst, the fumes leaving the painters bent. Kavanagh wants that image to work in Conor's mind.