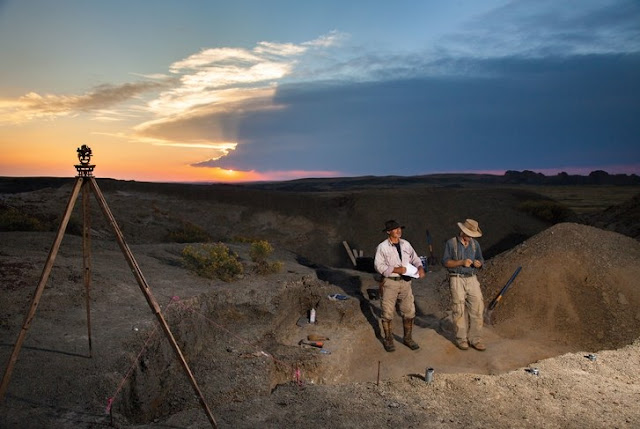 New Yorker – "The Day the Dinosaurs Died"
By Douglas Preston

"One day sixty-six million years ago, life on Earth almost came to a shattering end. The world that emerged after the impact was a much simpler place. When sunlight finally broke through the haze, it illuminated a hellish landscape. The oceans were empty. The land was covered with drifting ash. The forests were charred stumps. The cold gave way to extreme heat as a greenhouse effect kicked in. Life mostly consisted of mats of algae and growths of fungus: for years after the impact, the Earth was covered with little other than ferns. Furtive, ratlike mammals lived in the gloomy understory.

But eventually life emerged and blossomed again, in new forms. The KT event continues to attract the interest of scientists in no small part because the ashen print it left on the planet is an existential reminder. “We wouldn’t be here talking on the phone if that meteorite hadn’t fallen,” Smit told me, with a laugh. DePalma agreed. For the first hundred million years of their existence, before the asteroid struck, mammals scurried about the feet of the dinosaurs, amounting to little. “But when the dinosaurs were gone it freed them,” DePalma said. In the next epoch, mammals underwent an explosion of adaptive radiation, evolving into a dazzling variety of forms, from tiny bats to gigantic titanotheres, from horses to whales, from fearsome creodonts to large-brained primates with hands that could grasp and minds that could see through time."
Posted by Eric at 7:41 AM