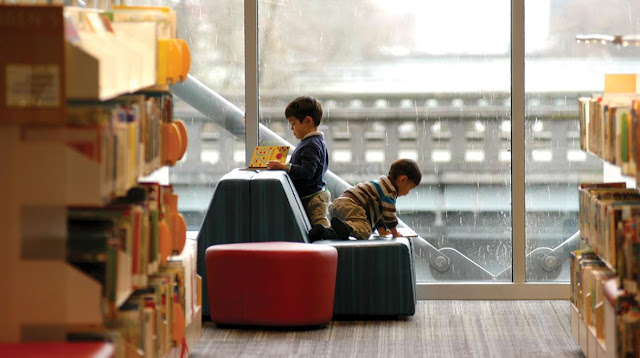 "If the public library did not already exist as a pillar of local civic engagement in American towns and cities, there’s no way we would be able to create it. It seems like a relic of a bygone era of public optimism, a time when governments worked to value and edify their people, rather than punish and extract from them. In America, a country that can often be cruel to its citizens, the public library is a surprising kindness. It is institution that offers grace and sanctuary, and a vision of what our country might one day be.

To the eyes of a modern American, it can be a strange, even disorienting vision. For one thing, public libraries are unusually beautiful places, the kind of buildings that make you feel underdressed. In many American cities, the public library ranks among the most ornate and stately fixtures of downtown. They’re erected in early-20th century high style, like the Egyptian revival building at Los Angeles’ Riordan Central Library, or Boston’s neoclassical McKim building. Or sometimes they’re modern monuments to an ongoing investment in public services, like Seattle’s fantastic main branch, a gleaming structure in glass enmeshed in steel latticing.

The majesty of library buildings is matched only by the nobility of their purpose. The public library does not make anyone money; it does not understand its patrons as mere consumers, or as a revenue base. Instead, it aspires to encounter people as minds. The public library exists to grant access to information, to facilitate curiosity, education, and inquiry for their own sake. It is a place where the people can go to pursue their aspirations and their whims, to uncover histories or investigate new scientific discoveries.

And it is available, crucially, to everyone. It costs nothing to enter, nothing to borrow – in New York, and in many other cities, the public library system has even eliminated late fees. All the knowledge and artistry of its collection is available to the public at will, and it is a privilege made available, without prejudice, to rich and poor alike."