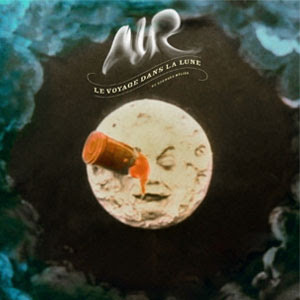 French music duo Air were commissioned back in 2010 "to provide a new soundtrack to a hand coloured version of Georges Méliès 1902 silent film Le Voyage Dans La Lune (Journey To The Moon).

Discovered in 1993, the coloured print was restored and premiered this year at the Cannes Film Festival in France, with Air's soundtrack. Air decided to extend the soundtrack into a full album, which as well as Legrand, features vocals from Au Revoir Simone.

You may recognize the name George Méliès as the character Ben Kingsley portrayed in Martin Scorsese's new film Hugo.
Posted by Eric at 10:49 PM