The Most Popular Sports in the New York Times 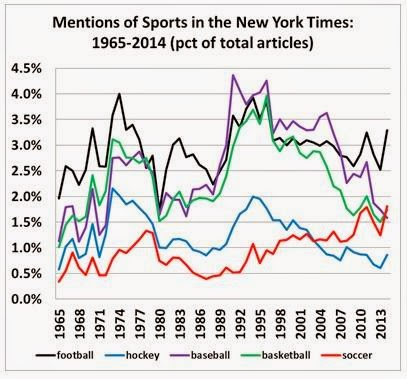 New Yorker - "Are You Ready for Some Football?"
by Jay Caspian Kang

"Popular American institutions are never really in trouble until they are really in trouble. The hard crash happens at the end, in part, because the people tasked with tracking their rise and fall can’t imagine a world without them. The N.F.L., which looks today like Detroit did in the nineteen-fifties, with revenues nearing ten billion dollars a year—and a stranglehold on the public’s sports appetite (according to a Harris poll from earlier this year, thirty-five per cent of Americans name professional football as their favorite sport, more than baseball, basketball, and hockey combined)—has withstood ongoing concern over concussions, various gun/night-club/boat scandals, and a small but growing sentiment among sportswriters and parents that it is a corrupt and craven institution. And though these problems take up quite a bit of space on the yelling-heads sports-talk programs and blogs, the N.F.L. continues to grow, to the extent that it sometimes feels hard to connect the constant scandals to the games broadcast to millions every Sunday (and Monday, and now Thursday)."