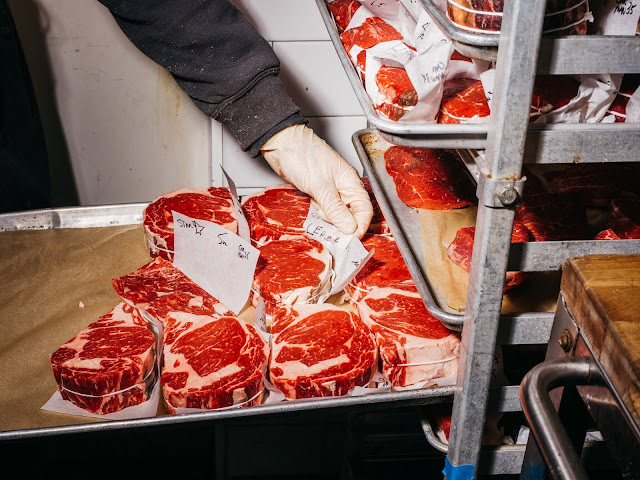 "Mr. Thornhill, 37, and his colleagues — notably the restaurant’s original butcher, Tom Coss — have made it a mission to make steaks out of cuts long considered too tough, small or unsightly for the assignment. This accounts for the long list of steaks that most diners will never have seen on a steakhouse menu, if at all.

They include, depending on the night, obscure cuts (like gracilis and coulotte) and others presumed to be palatable only if slow-cooked or ground into hamburger (ball tip, brisket deckle).

Through trial and error, Mr. Thornhill and Mr. Coss developed methods for butchering and aging tougher, leaner cuts that deepen the flavor and help tenderize the meat, at least to a point. (Mr. Coss was laid off, along with the rest of the staff, at the start of the pandemic; he now is head butcher at the Shambles, a Seattle bar and butcher. Mr. Johnson joined Bateau after it resumed regular service in April.)

For diners, part of the Bateau experience is learning that meat from free-roaming, grass-fed cows will always require a sharp knife. “As consumers, we’ve been told that the best-quality meat is tender meat, fork tender,” Mr. Thornhill said. “Our metric for quality is flavor.”

All of the steaks, including the traditional steakhouse varieties, are cooked the same: seared in cast-iron pans and basted with brown butter. The meat is priced by weight, with some cuts available in four- or five-ounce portions. This reduces waste and encourages diners to sample." 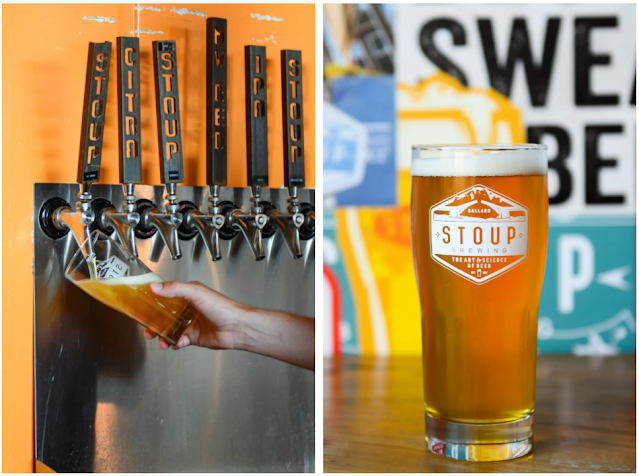 "Seattle is home to nearly 70 breweries — a staggering number, greater than several states can boast. Summer is one of the best times to backstroke through this ocean of cool beer as the pandemic loosens its grip. There’s always something new to try and someplace new to go as breweries continue to take root in this thirsty city, sometimes in the unlikeliest of places. Ersatz biergartens have sprung up in parking lots as the pandemic forces breweries to become creative about how to gather people safely.

Exhibit A lies about three miles north of downtown Seattle’s high-rises, where a patch of gray industrial land has become a popular brewery district in only a few years. Eleven breweries with taphouses occupy the roughly six-block square of what’s now called the Ballard Brewery District ...

But even this list doesn’t fully capture the sudsy momentum. Cast your eyes a few more blocks in any direction, and the number of breweries-with-taprooms swells. Cloudburst Brewing has added a satellite taproom to its nearby brewery about one mile west of here. A bit farther to the south sits Holy Mountain Brewing, one of the best microbrewers in the nation. A beer lover could wander for days. Best of all, almost everything is so close that the thirsty and curious can explore on foot, or on one of Seattle’s ubiquitous shared scooters or city bicycles."