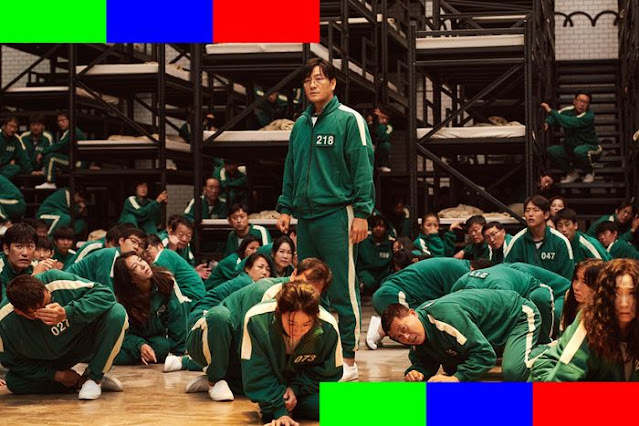 "Netflix’s ability to turn non-English-language shows into worldwide hits is nothing new, with series such as Narcos, Dark, La Casa de Papel (Money Heist), and Elite all breaking out in big ways over the past five years. But those triumphs are starting to pale next to the emerging success of Squid Game, a hugely addictive dystopian drama from South Korea that, barely two weeks after its premiere, has become a massive social-media phenom — and the No. 1 show on the streamer’s popularity charts in 90 countries, including the United States. Just how big is it? Netflix co-CEO Ted Sarandos went on record this week predicting that writer-director Hwang Dong-hyuk’s creation might soon dethrone Bridgerton and The Witcher as the platform’s most sampled original-series launch ever.

Netflix’s global TV head, Bela Bajaria, says her colleagues at Netflix Korea, under the guidance of regional content chief Minyoung Kim, had long expected big things from Squid Game, particularly when the first footage started coming in. And because consumption of K-dramas among U.S. Netflix subscribers has exploded by 200 percent in the past two years, the company was optimistic that Hwang’s epic story could overperform here and in other parts of the world. “But we could not imagine that it would be this big globally,” Bajaria tells Vulture. “We always knew it was going to be a signature title for Korea, but there’s no way to have anticipated it would be this big.”

The near-instant enthusiasm for Squid Game is all the more impressive because the series isn’t based on any preexisting intellectual property, such as a book or comics series, and thus didn’t arrive with a corresponding built-in fan base or even the name recognition of something like Lupin. And while Bajaria says the show did get a substantial promotional push in Korea and other Asian countries, there was hardly any marketing in the U.S. outside of a trailer tailored to American audiences. Instead, Squid Game seems to have broken out simply through what the exec calls “an organic fandom,” one fueled in no small part by Netflix’s ability to put the show into more than 200 million homes around the world at once. Subscribers “tweeted and TikToked about it, and it just grew through word of mouth,” Bajaria says. “People hear about it, people talk about it, people love it, and there’s a very social aspect to that, which does help grow the show outside of what we do.”

It also helps that, in addition to shelling out billions to produce its programming, Netflix invests millions more to make sure shows like Squid Game are easily watchable even for folks who don’t speak the language used in them. Netflix offers subtitles in 37 languages and dubs its shows in 34, far more than any other major streamer. That means subscribers who don’t have the patience for subtitles (read: a lot of Americans) are now much more likely to get invested in series and movies they otherwise would have skipped (dubbing scolds be damned).

This, along with streaming’s lack of time-and-space constraints, has dramatically expanded the potential audience for local-language content. Catching a new foreign-language movie, for example, once required residency in a big city or a tolerance for driving a few dozen miles in search of an art-house cinema. But in the streaming age, even if “you might not be the kind of person who would want to do that, you might click ‘play’ on Squid Game,” Bajaria says. Netflix’s decision to make international content widely available and easy to watch, she adds, “takes away the barrier of entry … and opens up different storytelling for more people.” And it’s clearly working in the U.S.: Bajaria says streaming of all non-English content is up 71 percent since 2019 among the platform’s American audience."