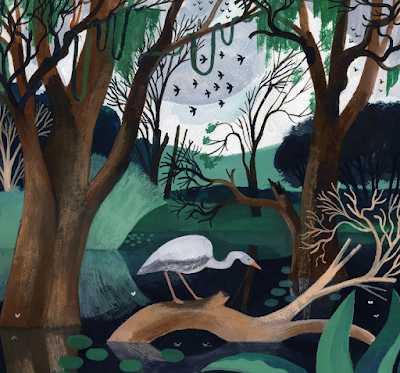 New Yorker - "Swamps Can Protect Against Climate Change, If We Only Let Them"

"Many people vaguely understand that wetlands cleanse the earth. In fact, they are carbon sinks that absorb CO2, and they are unparalleled in filtering out human waste, material from rotten carcasses, chemicals, and other pollutants. They recharge underground aquifers and sustain regional water resources, buffering the excesses of drought and flood. In aggregate, the watery parts of the earth stabilize its climate.

Wooded swamps are at the end stage of a fen-bog-swamp succession, legacies of the Ice Age, when the melt started the sequence by first creating stupendously huge lakes. Lake Agassiz covered more than a hundred thousand square miles of Saskatchewan, Manitoba, Ontario, North Dakota, and Minnesota. Lake Missoula covered about three thousand square miles of what is now Montana; its repeatedly bursting ice dams and cataclysmic floods spread through Idaho and Washington and created bizarre giant ripples as the long-ago gushers scoured out the channelled scablands of eastern Washington. The melt turned much of the North American continent into wet ground, with long chains of swamps gouged by no-brakes glaciers that plowed across the terrain. Burly new watercourses captured smaller streams and made deltas and estuaries.

In the nineteenth century, the United States enlarged in a fever of land acquisition: the 1803 Louisiana Purchase, involving eight hundred thousand square miles from the Gulf of Mexico to Canada, doubled the size of the country; in 1819, the Adams-Onís Treaty added Florida and part of Oregon; five hundred and twenty-five thousand square miles of Texas were annexed in 1845; the Oregon Treaty, in 1846, enrolled the Pacific Northwest from Northern California to the Strait of Juan de Fuca. Great oceans and lakes framed the country, and the interior roiled with tangles of rivers like unspooling silver ribbons. All that territory had once held a wealth of wetness—scientists have estimated that approximately two hundred and twenty-one million sopping acres existed in the early seventeenth century, much of it swamps—and two hundred years later many swamplands remained. As the United States pushed its borders, its population leaped from 7.2 million people in 1810 to 12.8 million by 1830, almost doubling in twenty years. The welcoming arms of open immigration became the hallmark of America, and that reputation lingers in global memory, despite today’s more painfully stringent reality.

The original occupants of the continent knew the rivers and swamps, the bogs and lakes, as they knew the terrain and one another. But for most English settlers and European newcomers nature consisted of passive and inanimate substances and situations waiting to be used to human advantage. Preservation and care of nature were not what they had come for."