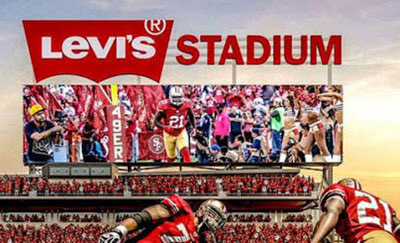 "It's a non-traditional deal. You don't see many apparel companies with their names on stadiums and arenas," said Jim Andrews, senior VP-IEG. "But it does a couple of things for Levi's. They're a heritage brand -- and part of that heritage is being from San Francisco. This plays that up big time. Also, this stadium will be extremely high tech and it will be in Silicon Valley. So it will enable Levi's to associate their brand with something very cool, very hip, in the future."

"One reason [the 49ers] are leaving San Francisco for Santa Clara is to attract the high-tech business down there," said Mr. Dorfman, the creative director of Baker Street Advertising in San Francisco. "I just assumed they wanted to sign a sponsor based in Silicon Valley, not San Francisco, for the naming rights."
Posted by Eric at 7:18 AM