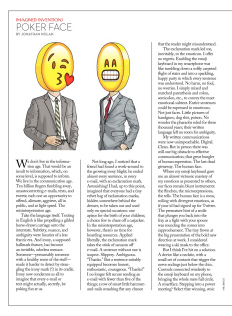 "We don't live in the information age. That would be an insult to information, which, on some level, is supposed to inform. We lie in the communication age. Ten billion fingers fumbling away, unautocorrecitng e-mails, texts and tweets; each one an opportunity to offend, alienate, aggrieve, all in public, and at light speed. The misinterpretation age.

Take the language itself. Texting in English is like propelling a gilded horse-drawn carriage onto the interstate. Subtlety, nuance, and ambiguity were luxuries of a less frantic era. And irony, a supposed hallmark feature, has become an invisiable, odorless menace. Someone--presumably someone with a healthy sense of the stuff--made it harder to detect by strangling the irony mark (⸮) in its cradle. Irony now condemns us all to imagine that every e-mail or text might actually, secretly, be poking fun at us.

Not long ago, I noticed that a friend had found a work-around to the growing irony blight; he ended almost every sentence, in every e-mail, with an exclamation mark. Astonishing! I had, up to this point, imagined that everyone had a tiny velvet bag of exclamation marks, hidden somewhere behind the dresser, to be taken out and used only on special occasions: one apiece for the birth of your children; a choice few to chase off a carjacker. In the misinterpretation age, however, there’s no time for hoarding resources. Applied liberally, the exclamation mark takes the stink of sarcasm off e-mail. A sentence without one is suspect. Slippery. Ambiguous. “Thanks.” But a sentence suitably equipped becomes honest, enthusiastic, courageous. “Thanks!” I no longer felt secure sending an e-mail with fewer than five of the things; a row of smart little hammer-and-nails smashing flat any chance that the reader might misunderstand.

The exclamation mark led me, inevitably, to the emoticon. I offer no regrets. Enabling the emoji keyboard in my smartphone was like tumbling down a softly carpeted flight of stairs and into a sparkling happy party in which every sentence was understood. No harm, no foul, no worries. I simply mixed and matched parenthesis and colon, semicolon, etc., to convey the exact emotional subtext. Entire sentences could be expressed in emoticons. Not just faces. Little pictures of handguns, dog shit, poison. No wonder the pharaohs rules for three thousand years; their written language left no room for ambiguity.

My written communications were now unimpeachable. Digital. Clean. But in person there was still one big obstacle to effective communication; that great bungler of human expression. The last dead giveaway. The human face.

Where my emoji keyboard gave me an almost virtuosic mastery of my emoticons as presented to others, our faces remain blunt instruments; the flinches, the microexpressions, the tells. The human face is a mess, roiling with divergent emotions, as if your id has signed up for Twitter. The premature hint of a smile that plunges you back into the fray as a fight with your spouse was rounding the corner into rapprochement. The tiny frown at the big presentation of the bold new direction at work. I considered wearing a ski mask to the office.

But I think I've hit on a solution. A device like a necktie, with a small set of contacts that trigger the nerve endings just below the chin. Controls connected wirelessly to the emoji keyboard on my phone, bringing the whole mess full circle. A smartface. Stepping into a power meeting? Select that winning, stoic half smile. On a date? Dial in a little mystery. Responses would be semi-automatic. Parameters assigned. Someone says something uncouth, unreconstructed, obscene? People would never know from your reaction-unless you wanted them to.

A premium account brings deepere integration with big data: Facebook, Google, the Department of Justice. Your smartface will flash a broad, toothy smile at people whose politics and world view match yours--and a tight little one for those whose don't. A small wink for your fellow NRA or PETA members. Why make your friends pullout their phones when they can read your status right there on your knotted brow: "It's complicated"? In more charged social situations, your face could finally start looking out for you instead of letting you down. The woman with chronically bad  taste in men won't know why she finds herself scowling at the handsome rogue with late child-support payments and an addiction to Muscle Milk. She just will.

Digital emotions. Sweet relief for those of us quipped with a sour puss. Downloadable content would insure that your new kisser remained unflappable, ambiguity-free, fresh. Epansion packs for more sophisticated looks: consternation, triumph  ennui. The Calvin Klein smirk. The Versace grimace.If I can afford it, I'll go custom; a bespoke smile built just for me by an emoji speakeasy in a painfully trendy neighborhood. Mouth tilted down ever so slightly at the corners, eyes narrowed to an Eastwood, my face drawn into a rictus of mild amusement, two degrees south of smug, one north of glib. Right on target. Walking along the street assured that my poke face betrays nothing--and that non one could possibly misunderstand. :)"
Posted by Eric at 1:08 PM