Fran Lebowitz on Politicians in the National Spotlight 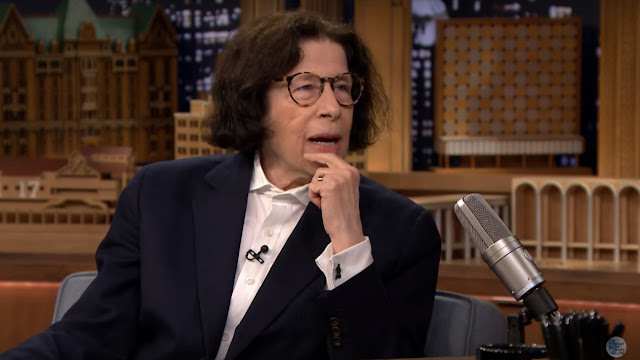 Q: "Has this crisis shown us anything about Donald Trump that we didn’t know before?

His absolute belief in himself, that is something that is not going to ever change. And he doesn’t care. When people say he’s not showing enough empathy—he doesn’t know what it means. Whenever he uses the word “love,” which he does occasionally, I think of the word “algebra,” because I don’t know what algebra is. I took Algebra 1 four times, because I failed it four times, and I still don’t know what algebra even means. I know the symbols. And that is what love means to Donald Trump.

Q: New Yorkers have suddenly rallied around Governor Cuomo and used Mayor de Blasio as a punching bag. As someone who’s been more of a fan of de Blasio than Cuomo, what do you think of that?

Well, I haven’t been a fan of de Blasio’s in quite some time. Look, I could see right away when de Blasio was running that he was slow. Whenever he talks, I’m always going, “Come on! Come on!” So that is a flaw. The mayor of New York is the second-hardest job in the country, after the President, and I never thought he was up to it. But his heart was in the right place, and it had been a really long time since the mayor cared about poor people, of which there are zillions in New York. Universal pre-K was a great thing. I said to my friends, “You don’t like him because he doesn’t cater to you. You don’t need him.”

Q: I want to go back to Cuomo, because he’s getting such adulation for his role in this, and I’m curious if you think that it’s deserved.

He’s being compared to Trump, so naturally he looks like Abraham Lincoln. First of all, Trump is very lazy. I can tell you, the same way basketball players say “game recognizes game,” sloth recognizes sloth. This is a lazy guy. I actually know this. And Andrew Cuomo is an incredibly industrious person, and I do think he’s doing a good job. He’s doing a job, which Trump is not.

I’ve watched some of Cuomo’s press conferences. Some of them drive me crazy. When he gets off of facts and starts talking about his mother and his brother, that’s the kind of folksiness—a New York version of folksiness—that I cannot abide. That’s when I shut the TV off. But my main question is: Where did he get that haircut? I watched him yesterday, I watched him today. Between these two times, he got his hair cut. Is there some secret haircutting place where you’re allowed to go? Because, if so, I also need a haircut.

Q: What do you think Joe Biden should be doing right now?

I think he should be out there more. He’s disappeared. Also, the interest in the election has disappeared, and that is a dangerous thing. Can’t people do more than one thing at a time?

Q: What are your thoughts on how the primary has turned out?

From the beginning, I was very depressed. I was quite an ardent supporter of Elizabeth Warren. It’s very unusual to have such a good candidate. I realized that she’s a woman and that was going to be a bad thing for her, as it is for all of us. Also, that she was the smartest, and that has always been something that Americans cannot stand. So a smart woman, I thought, doesn’t really have much of a chance.

Q: Do you think the pandemic has given more credence to his argument for Medicare for All?

Medicare for All—which used to be called socialized medicine—is something that, of course, can be done. They have it all over Europe. Can it be done quickly in this country? No. But it’s an absurd idea that hospitals should be businesses. People say, “If you love your health insurance”—who is that? Who loves their health insurance? No one really wants health insurance. People want health care. It’s, like, no one wants car insurance. They want a car.

I think the popularity of Bernie Sanders just has to do with his shouting, which people seem to mistake for some sort of intellectual energy. It drives me crazy. And most of the things he says should be free, I agree with him. Yes! Public colleges should be free. They were, up until the late seventies, in New York. Someone has to explain: colleges were free, but they were paid for by taxes. Take my taxes and please pay for free colleges. Please do not take my taxes and give it to Carnival Cruise Line.

I agree with him. I agree with these ideas. But if you’re asking me if he would be a good President—he’s not even a good senator! He just yells. Also, I’ve always thought, What kind of person leaves New York when they’re eighteen? People should come to New York when they’re eighteen. And many of the things that are wrong with New York that prevent many people from coming—which is how psychotically expensive it’s become—should be changed. He’s seventy-eight, right? That’s the age you should go to Vermont. New York’s a very hard place to live, and I understand if, by the time people are seventy-eight, they can’t take it anymore. Go to Vermont, and, when you get there, take an eighteen-year-old and put them on a bus and send them to New York.

Right. And if the eighteen-year-old says, “Who can afford to live in New York?” Well, you, because we’re going to change everything for you. I have always really disliked Joe Biden, mainly because of the Anita Hill hearings, which I did not have to be reminded of during the Kavanaugh hearings. I remembered it very well and I was appalled. And because he turned Delaware into a cesspool of usury. But I was so happy when he started winning. And that to me was sad. I thought, This is what it’s come to. You’re happy that Joe Biden is winning.

Q: Speaking of former New York mayors, what happened to Giuliani? Was he always this insane?

I don’t think he was always this crazy, but it was always a sham. This idea that Giuliani was some sort of great mayor is absurd. Giuliani was the first person I remember who started this kind of poisonous politics of nostalgia, which is really just racism, at its core. When Giuliani was running for mayor for the first time, I kept saying to people, “Are you watching these ads of Giuliani’s, which are basically saying, ‘Vote for me and it’ll be 1950 again’?” I hated him as a mayor. In my entire time I’ve lived here, I’ve only liked two mayors, [John] Lindsay and [David] Dinkins.

But, in a way, what’s happening to Cuomo is somewhat like what happened to Giuliani. On September 11th, when Giuliani became “America’s Mayor,” the reason for that was that the President was hiding. We now have Cuomo, who’s not a sham like Giuliani, and the President is not hiding, but the President is totally incompetent. I guarantee you that Trump is seething at the attention Cuomo’s getting."
Posted by Eric at 3:37 PM