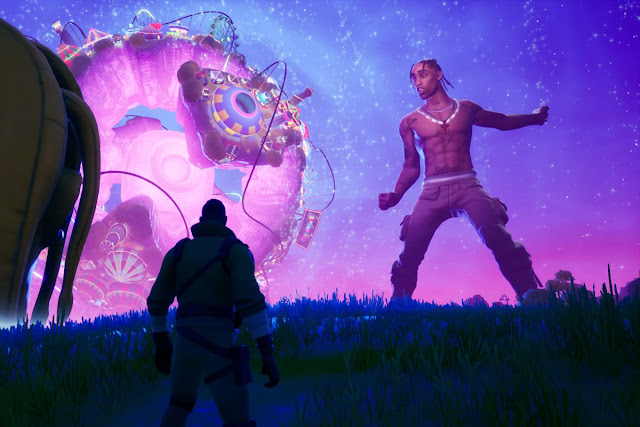 "The experience, which lasted about 10 minutes, was more animated short film than concert. Scott’s face melted away to reveal a robot skeleton that would make Schwarzenegger proud, and his giant avatar performed hits like “Goosebumps” through neon lasers, and “Highest In the Room” underwater. It was overtly trippy. It felt like marketing. Even in the confines of a video game, giant Travis was a detailed capitalist, making sure to wear an assortment of his coveted Jordan collaborations that currently fetch $500 to $1,000 on the resale market. In the game, the shoes appeared several stories tall.

To end the show, Travis went to space, bringing you with him whether you wanted to or not. It was then he premiered the biggest draw of the evening, a new collaboration with Kid Cudi called “The Scotts.” In the distance, a planet made in Travis’ image was visible with an Astroworld carnival situated on the crust and a boombox operating as the celestial body’s core. Yet as soon as the planet seemed within the player’s grasp, it started to crumble, claimed by a cataclysm. Then it was all over. I was back in the world of Fortnite, no longer besieged by Travis Scott. The player nearest to me realized they could use their weapons again, and killed me."