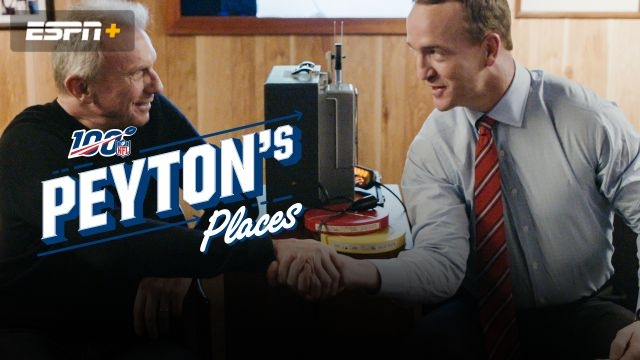 NBC Sports – "FMIA Week 6: Ryan Tannehill, Titans Are Changing The Narrative In AFC"
By Peter King
"Season deux of “Peyton’s Places,” the quirky and fun Peyton Manning/NFL Films history project that started last year (he wore Joe Namath’s famous fur coat, and recreated a publicity stunt of the old Giants by throwing a pass to Cris Carter from the top of a Manhattan skyscraper, among other shows), continues with 15 new episodes on ESPN+, running from late November to February. The pandemic scotched a few of the shows Manning would have liked to do, but he was able to safely travel enough to get some good new shows. “It’s a history project that became a passion project,” Manning told me. “There’s so many fascinating things about football history that people just don’t know.”
Such as these, from season two:
• There used to be cars on stadium fields; the Steelers had them at Three Rivers Stadium back in the glory days. Sponsors would pay to have their cars shown on the field. Manning interviews Lynn Swann with the same model car he won for being Super Bowl MVP—an AMC Pacer. If you’re not of a certain age, you don’t know what that is. But it’s not luxurious."
• Manning went to West Point with former president Bill Clinton to discuss the birth of the forward pass in 1913. “Teddy Roosevelt actually fought to legalize the forward pass,” Manning said. ”President Clinton talked about Roosevelt and his impact on football. He really studied the football aspect going into our meeting.”
• At Oakland Tech High in California, hometown hero Marshawn Lynch taught Manning how to drive the injury cart, which Lynch did at Cal late in a 2006 victory. That ride became known as “Ghost-riding the whip.” Lynch, reclusive except on commercials, also went deep with Manning on a few things—the geometry of running, why he dissed the press, the Beastquake run, how growing up in Oakland made him who he is.
• At Thomas Edison’s Lab in West Orange, N.J., Manning got to see the first football game film ever shot, the 1903 Princeton-Yale game. Edison invented the camera used to shoot the game. Ron Jaworski watched with Manning in the same room Edison watched that film 117 years ago, and Jaworski, a film nerd of the highest degree, talked about the history of film study.
• Manning played Madden with the first victim of the Madden Curse, running back Garrison Hearst.
“None of it’s possible without NFL Films,” Manning said. “They’ve got film of everything. They’ve got Teddy Roosevelt and footage of the early forward pass. Amazing. I love football. You love football. NFL Films really loves football.”
We spend a lot of time in our business figuring out when Manning will take a job running a franchise, or being some network’s jillion-dollar lead game analyst. But think of the life he has now: He gets to do a fun series like this, he gets to be at most every one of his kids’ events (school and sports) he wants to see at home in Colorado, he gets to live as normal a life as he wants, and he’s only 44. Plenty of time to do whatever he wants.
Posted by Eric at 9:34 AM