AI to Text with a Deceased Loved One 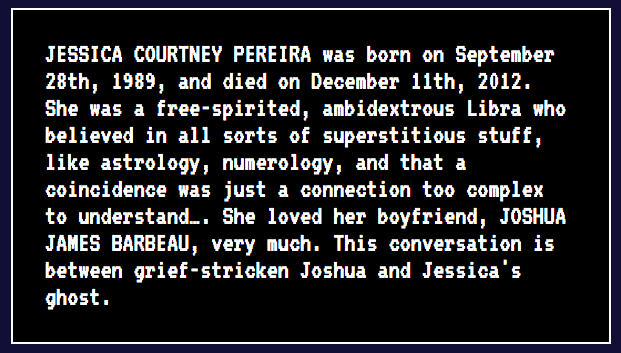 San Francisco Chronicle – "The Jessica Simulation: Love and loss in the age of A.I."

"In the last decade, an approach to A.I. known as “machine learning” has leaped forward, fusing powerful hardware with new techniques for crunching data. A.I. systems that generate language, like GPT-3, begin by chewing through billions of books and web pages, measuring the probability that one word will follow another. The A.I. assembles a byzantine internal map of those probabilities. Then, when a user prompts the A.I. with a bit of text, it checks the map and chooses the words likely to come next.

These systems are called “large language models,” and the larger the model, the more human it seems. The first version of GPT, built in 2018, had 117 million internal “parameters.” GPT-2 followed in 2019, with 1.5 billion parameters. GPT-3’s map is more than 100 times bigger still, assembled from an analysis of half a trillion words, including the text of Wikipedia, billions of web pages and thousands of books that likely represent much of the Western canon of literature.

Despite their size and sophistication, GPT-3 and its brethren remain stupid in some ways. “It’s completely obvious that it’s not human intelligence,” said Melanie Mitchell, the Davis Professor of Complexity at the Santa Fe Institute and a pioneering A.I. researcher. For instance, GPT-3 can’t perform simple tasks like tell time or add numbers. All it does is generate text, sometimes badly — repeating phrases, jabbering nonsensically.

For this reason, in the view of many A.I. experts, GPT-3 is a curiosity at best, a firehose of language with no inherent meaning. Still, the A.I. seems to have moments of crackling clarity and depth, and there are times when it writes something so poetic or witty or emotionally appropriate that its human counterparts are almost literally left speechless.

“There’s something genuinely new here,” said Frank Lantz, director of the Game Center at New York University’s Tisch School of Arts and a video game designer who has been beta-testing GPT-3. “I don’t know exactly how to think about it, but I can’t just dismiss it. "