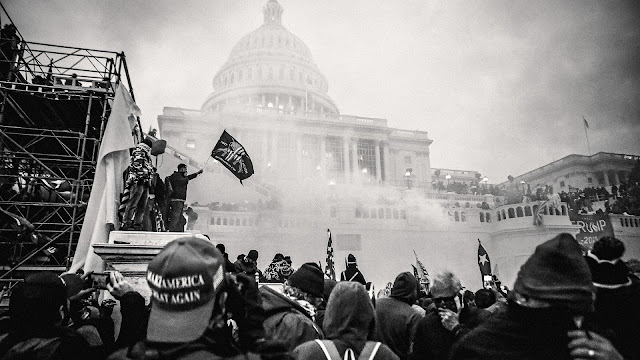 The Atlantic - "Trump's Next Coup Has Already Begun"

"“The thing that got our attention first was the age,” Pape said. He had been studying violent political extremists in the United States, Europe, and the Middle East for decades. Consistently, around the world, they tended to be in their 20s and early 30s. Among the January 6 insurgents, the median age was 41.8. That was wildly atypical.

Then there were economic anomalies. Over the previous decade, one in four violent extremists arrested by the FBI had been unemployed. But only 7 percent of the January 6 insurgents were jobless, and more than half of the group had a white-collar job or owned their own business. There were doctors, architects, a Google field-operations specialist, the CEO of a marketing firm, a State Department official. “The last time America saw middle-class whites involved in violence was the expansion of the second KKK in the 1920s,” Pape told me.

Yet these insurgents were not, by and large, affiliated with known extremist groups. Several dozen did have connections with the Proud Boys, the Oath Keepers, or the Three Percenters militia, but a larger number—six out of every seven who were charged with crimes—had no ties like that at all.

Kathleen Belew, a University of Chicago historian and co-editor of A Field Guide to White Supremacy, says it is no surprise that extremist groups were in the minority. “January 6 wasn’t designed as a mass-casualty attack, but rather as a recruitment action” aimed at mobilizing the general population, she told me. “For radicalized Trump supporters … I think it was a protest event that became something bigger.”

Pape’s team mapped the insurgents by home county and ran statistical analyses looking for patterns that might help explain their behavior. The findings were counterintuitive. Counties won by Trump in the 2020 election were less likely than counties won by Biden to send an insurrectionist to the Capitol. The higher Trump’s share of votes in a county, in fact, the lower the probability that insurgents lived there. Why would that be? Likewise, the more rural the county, the fewer the insurgents. The researchers tried a hypothesis: Insurgents might be more likely to come from counties where white household income was dropping. Not so. Household income made no difference at all.

Only one meaningful correlation emerged. Other things being equal, insurgents were much more likely to come from a county where the white share of the population was in decline. For every one-point drop in a county’s percentage of non-Hispanic whites from 2015 to 2019, the likelihood of an insurgent hailing from that county increased by 25 percent. This was a strong link, and it held up in every state."