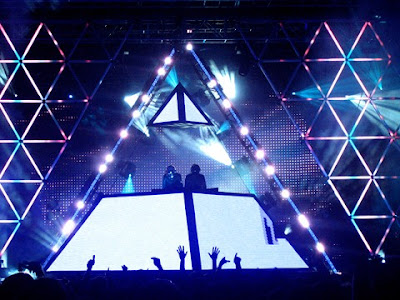 "EDM [Electronic Dance Music] getting so big with Millennials says something about the conditions of the generation. There's a perverse pressure on them. On one hand, we've been raised with the notion that we are the generation that can change things. We're progressive, modern. We've grown up in tandem with the digital revolution and will make great strides with the technology at our fingertips.

And yet, with all this, we have a set of problems to inherit that seem to be ever growing and ever more severe. Political gridlock and inefficacy. Precarious economy. Lack of jobs as the cost of education reaches ludicrous levels. Climate change. Global political fallout from decades of decolonization and, on our part, bullying. Nobody I know who grew up in the '90s was raised to expect any of that.

Few are conscious of this, but it's there, it's embedded. There's a sensation of paralysis, of great unease about the future in most people I know my age. So the sudden rise of a scene where you can chase oblivion makes sense. The moment where our collective inertia may have elevated a form of music not for its merits (which exist), but for the fact that it can represent what we really want: an exit door with strobe borders, a rabbit hole lined in lasers. I'm talking about the moment where the attraction of EDM becomes precisely those three days where you can so fully enmesh yourself in the music that you go beyond the point of thinking or caring about what you might be escaping from. Not catharsis. Erasure."
Posted by Eric at 11:16 PM