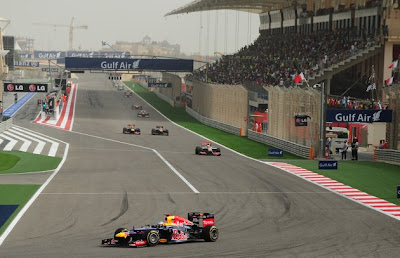 Having watched the last ten laps of the Formula 1 Bahrain Grand Prix this morning I'm a new fan of the sport that has drivers whipping "the fastest, most sophisticated race cars on earth" in exotic locales across the world: Kuala Lumpur, Barcelona, Monaco, Singapore, Brazil.


"Will America Ever Catch the Formula One Bug?"

"It's my impression, though, after a weekend at the circuit, that F1 should be less concerned with mimicking the moves of NASCAR than standing as a clear alternative—in particular, for the politically blue sports fan who has long balked at the fuss surrounding NASCAR...In the end, there are allegiances to the teams and drivers, and a reverence of the past that's not unlike our romanticism of, say, baseball. "The history is the attraction," Webber says. "Some of the tracks we've been racing on since the '50s."
Posted by Eric at 7:27 PM