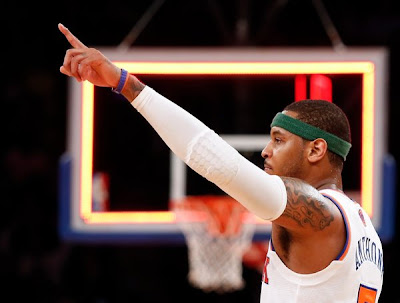 "It took Carmelo Anthony only 14 days as a Knick to script his first signature moment, to stoke the dormant dreams of an expectant city and make all things seem possible.

On March 9, 2011, with time running down and Tony Allen in his personal space, Anthony hopped to his left, lofted a 20-footer and beat the Memphis Grizzlies with a half-second to spare. As he backpedaled away, Anthony smiled wide and chirped, “I do this!”

He does this. This much, the entire N.B.A. knew when the Knicks sent a hefty package of players and draft picks to Denver to acquire Anthony two years ago. Anthony scores, brilliantly, from everywhere, with a showman’s flair and an adolescent joy. He dominates the game like few others in basketball history.

He thrills. He inspires. He wins. He does this.

The only thing Anthony does not do, or at least has not done, is win when it matters most — an asterisk that blots his otherwise enviable résumé. Anthony has led his team out of the first round once in nine years (and never with the Knicks), a fact that supporters and critics can recite from memory.

The postseason run that begins Saturday presents Anthony with his best chance yet to shift perceptions and shred tired narratives.

The Knicks open the playoffs at home, as the East’s No. 2 seed, against the aging, brittle Boston Celtics. There are no elite teams standing between the Knicks and an eventual conference finals showdown with the Miami Heat."

"If Anthony is exceptionally confident, it might be because this is also the best he has ever been."
Posted by Eric at 2:11 PM