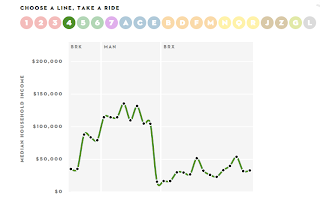 The New Yorker - "Idea of the Week: Inequality and New York'S Subway"

"According to recent data from the U.S. Census Bureau, if the borough of Manhattan were a country, the income gap between the richest twenty per cent and the poorest twenty per cent would be on par with countries like Sierra Leone, Namibia, and Lesotho."

The New Yorker's interactive infographic shows the wide range in median household income based on subway stops. The biggest range:

$205,192—The highest median household income of any census tract the subway has a station in (for Chambers Street, Park Place, and World Trade Center, all in Lower Manhattan).