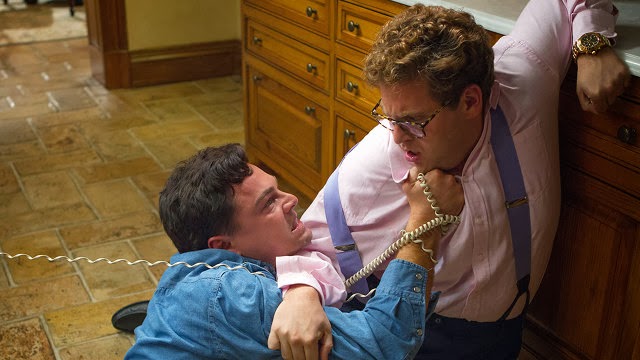 Fast Company - "The Turning Point: How "The Wolf of Wall Street" Found Its Ferocity"

"In the run-up to the 86th Academy Awards, Oscar-nominated screenwriter Terence Winter explains the choices he made with Martin Scorsese that turned Wolf into a tour de force."

"Originally, [the Quaalude scene] was two separate scenes. The part where Jordan rescues Donnie and saves him from choking was originally later in the movie, after Jordan had gotten sober. Donnie was high and challenged Jordan to a race and they're swimming. Jordan looks down and Donnie's at the bottom of the pool and he has to pull him out and save him. But then we were talking about the whole wonderful energy of the first part of that scene earlier in the movie, where Jordan's at the country club and he passes out and has to get home, how funny that was. Leo said he wanted to keep that insane sequence going. We talked about the wonderful part in Goodfellas where Ray Liotta has that one crazy day where he has to get to the hospital, make the sauce, and get the drug dealers to the airport. Leo said what if there was a way to put Jonah's character choking at the end of this scene. And we talked about it and decided the only problem is, Jordan’s so high, how would he rescue Donnie unless, of course, he did more cocaine, to counteract the effects of the Quaaludes. I said that it's sort of like Popeye eating spinach. And then we thought, what if it's actually Popeye who motivates it--that it's on TV, and that's where he gets the idea. We were laughing and Marty said to try it, so I went off and worked on it for a couple of days. Then we got together again, we read it out loud, we were laughing hysterically, and we said “Let's do this.”

In the last six weeks prior to actual production, I met with Marty and Leo pretty much every single day. We met at three in the afternoon and worked until one in the morning. We went through the script line by line, word by word, reading it aloud, acting out the parts, talking about “Is there a better line? Is there a better way to say this? Because this is for keeps, this is gonna be the movie.” We really continued to play with it until it went live, changing the voiceover at the last minute, trying to get it just right. It's never done until it's completely done.
Posted by Eric at 8:37 AM