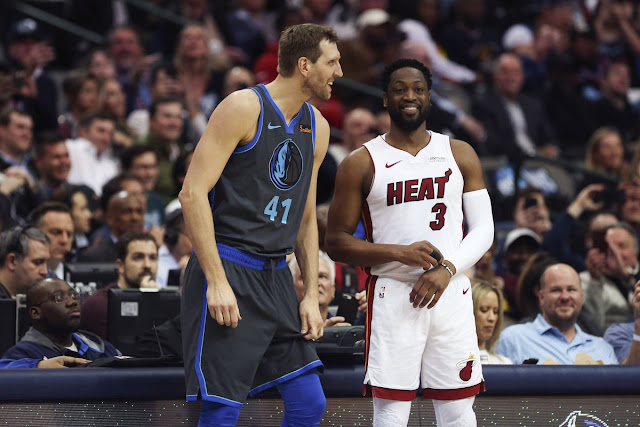 Bleacher Report – "The Ballad of Dirk and Dwyane"
By Howard Beck

"Even after the 2006 collapse, Nowitzki recalls thinking, "We're gonna be back in the Finals here from now on. This is our time. … And we didn't really notice I guess after '07 our window was closing right in front of our eyes."

Nowitzki had bounced back with his finest season, earning MVP honors while leading the Mavericks to a franchise-best 67 wins…only to lose to the eighth-seeded Golden State Warriors in the first round of the playoffs in one of the greatest upsets of all time.

That made two soul-crushing defeats in 10 months. Disconsolate, Nowitzki retreated to the Australian Outback with his longtime coach and mentor, Holger Geschwindner, for about five weeks in the summer of 2007.

"I take losses obviously very serious," Nowitzki says, reflecting on the moment. "If I'm one of the franchise players and obviously the best-paid player, I felt like if we don't win and we come up short, it's mostly my responsibility. That's how I always looked at it. And '06 was tough, and [after] '07, I was so frustrated I had to get away. So I wanted to get as far away as possible."

Nowitzki references a Geschwindner adage: "In doubt with yourself, always choose the world"—meaning, he says: "Don't stay by yourself; get out and do something. Experience something. Otherwise, you get frustrated and depressed. That's what we did that year. It was great for me. … Once I cleared my mind, I was ready to go again.""
Posted by Eric at 8:35 AM