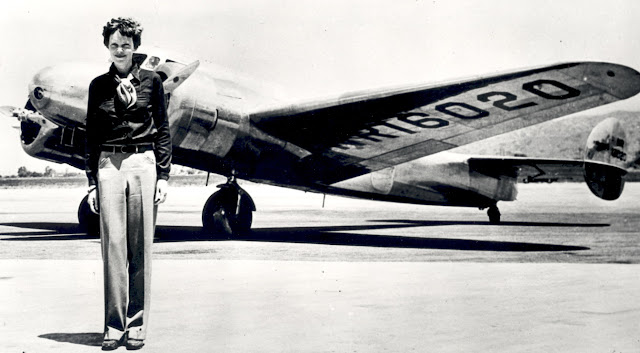 Esquire – "Robert Ballard Found the Titanic. Will He Find Amelia Earhart Next?"

"In the NatGeo special, the recent expedition is intertwined with fascinating historical footage of Earhart, a feminist and pioneer ahead of her time. When the 39-year-old took off from Miami in her twin engine Lockheed Electra on June 1, 1937, her goal was to become the first woman to fly around the world. But on June 2, as she took off from New Guinea, making her way through cloudy skies, she sent a radio transmission reporting she was low on fuel. Then she disappeared. The Navy launched an extensive search, but on July 19 after scouring 250,000 miles of ocean, the search was called off with no evidence of Earhart or her plane. The official explanation was that she crashed into the water.

Over the years, there have been several theories about what happened. She was captured by the Japanese and died in their custody. She made it back to the U.S. and lived undercover as a New Jersey housewife. But the hypotheses with the most evidence suggest she got somewhat close to her intended target of Howland Island. On August 9, after 52 hours in transit, the E/V Nautilus research ship approached the narrow ring of land where the evidence suggests Earhart spent her final days.

Ballard’s done this before. The 77-year-old deep-sea explorer has earned a reputation for finding the unfindable. In 1985, he discovered the Titanic. In 1989, he found the German Battleship Bismark. And in 2002, he identified the missing patrol boat PT-109 commanded by John F. Kennedy before he became president. “This is tougher,” Ballard tells me of the Earhart mission. “Am I confident? Sure. Give me enough time, I'll get it. It does exist. It's not the Loch Ness monster or Bigfoot. There is a plane down there.”

"Hey, it took four expeditions to find the Titanic. It took me two expeditions to find the Bismarck. These are not easy. I mean, do you really expect to have it just fall in your lap?” Ballard says. “It's a big ocean, but it'll be found. It's just when does the technology make it easy? Soon." Earlier this year, Ballard and his team were awarded nearly $100 million by National Oceanic and Atmospheric Administration (NOAA) to explore an estimated 3 billion acres of U.S. ocean territory. It’s a 10-year mission to explore the largely unknown underwater land the country owns. After being awarded the grant, Ballard talked to Chris Weber, Senior Vice President of National Geographic Studios, to tell her this mission would take him right by Nikumaroro. Weber and Ballard, who’ve known each other for four decades, knew that this was it—their chance to do a proper search of the island. "
Posted by Eric at 12:12 PM