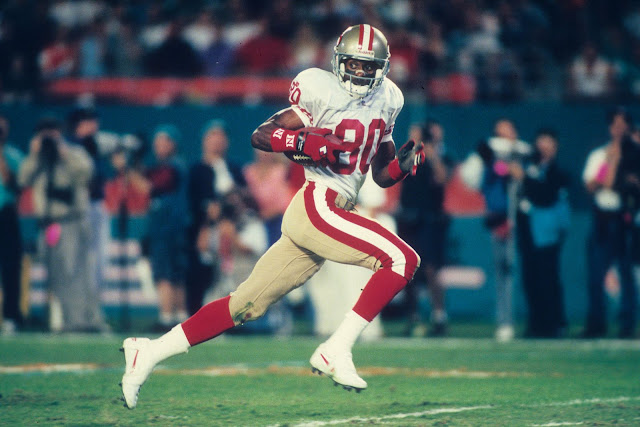 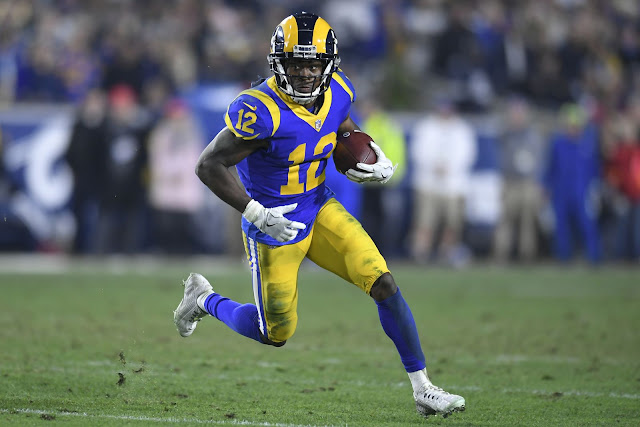 "As the NFL approached modernity, though, jersey-number standardization became the norm. In 1973, the NFL installed uniform restrictions that have more or less remained unchanged to the present day. Per those 1973 rules, receivers were only allowed to wear numbers between 80 and 89. However, teams were allowed to break the rules during training camp, when rosters expanded beyond the 53-man regular-season limit, making it hard to fit every player into the proper slots.

That was the situation for Keyshawn Johnson when the Jets drafted him first overall in 1996. No. 19 had no special meaning for Keyshawn, who wore no. 3 during his college career at USC. (While the NCAA rule book “strongly recommends” certain uniform numbers for position groups, the only hard-and-fast rule is that offenses must go into every play with five linemen wearing numbers between 50 and 79.) When Johnson was drafted, the Jets had already issued every number from 80 to 89, though, so he was assigned no. 19. (Hey, 1996 Jets equipment staff: Maybe prioritize getting your no. 1 pick the number he wants? Sheesh.)

In a strange twist, Johnson loved the number, deciding to keep it even after numbers in the 80s opened up. An old ESPN article explained that neither the NFL nor the Jets could fully remember why Johnson was allowed to keep wearing no. 19 into the regular season—just that Johnson was “very persistent” about it. Johnson was a perfect trendsetter, a brash superstar with dynamic skills and a legion of haters. His number was yet another representation of his iconoclastic ways. Other players wanted in, but the league remained steadfast in forcing every other receiver to wear numbers in the 80s for almost a decade.

Until 2004, that is, when the league made its first change to its uniform numbering policies in 20 years by opening up nos. 10 through 19 to wide receivers. There was good justification for the change: The passing game had grown significantly in importance over the course of three decades, and the majority of teams were rostering at least five receivers. Factor in the presence of three tight ends (also required to wear numbers in the 80s) on many rosters and the fact that some franchises had retired the jersey numbers of a handful of receivers, and teams were simply running out of space. Left unsaid was the other reason: Players wanted to be like Keyshawn.

It soon became a prerequisite for any young incoming star receiver to wear a number in the teens. In 2004, the first year after the rule change, the top three wide receivers taken in the draft (Larry Fitzgerald, Roy Williams, and Reggie Williams) all chose to wear no. 11 to begin their NFL careers. In the 15 drafts since, only four times has the highest-drafted receiver chosen to wear a number in the 80s (Calvin Johnson, Thomas, Cooper, and Davis)."
Posted by Eric at 1:06 AM