The Loss of a Sense of Time 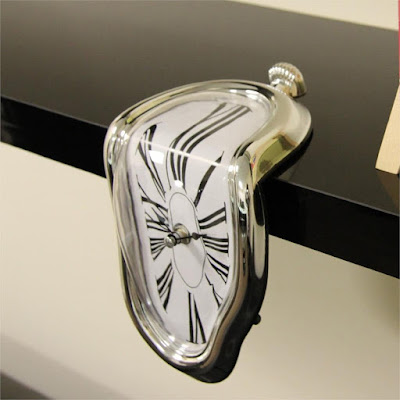 "The touch and taste of the 2010s was nonlinear acceleration: always moving, always faster, but torn this way and that way, pushed forward, and pulled back under. As the decade closes with an impeachment inquiry, Trump drags and twists the entire country through six turns each day."

"And, within a few months in 2016, both the primary catalog for millions of lives (Instagram) and the primary channel for news and culture (Twitter) switched from chronological to algorithmic timelines. All this happened while the country realized Trump could become president, and then he did — an experience somehow both mystifying and like watching a wet paper bag break."

"There’s more than one kind of time. You have your minutes and seconds ticking away, grounded in the Earth’s rotation and orbit. Paradoxically, given the lament of melting time, we’ve never had such easy access to this kind of precision on the subject. Knowing the time is relatively new to the human experience; the first cheap, reliable watch wasn’t made until the late 1860s, nor were there international time zones until 1884. But if you leave London and land in Los Angeles today, your phone will adjust and display in perpetuity the correct time in big sans serif numerals, no matter what you seek on the screen.

Then there’s the other kind of time: the expected rhythms of our lives (punching in, punching out, news and weather on the eights), constantly in flux.

Take, for instance, television. We’re living through an incredible boom of great shows. Often described, with a weary irony, as the era of Peak TV, this wealth of programming followed tech and traditional premium broadcasters finally figuring out how to commercialize streaming platforms in the 2010s. As a result, you the viewer can move in any sort of direction, watching in bulk something that aired last year, or on Sunday, or one scene again and again, freed from the now-or-never quality that TV once had. For decades, TV either made or ran parallel to the rhythms of American life: morning shows, daytime soaps, the 6 o’clock news, the playoffs, Johnny Carson. In between, the broadcast networks aired 22 half-hour episodes, weekly from September to May, at a fixed time, winding away in sequential order at a mass scale.

“Television took place over time,” critic Emily Nussbaum writes in her recent essay collection, I Like to Watch. “It took time to make, it took time to watch, it happened over time. A director films a movie, then later, people watch it; a novelist writes, then readers read. But television takes weeks, seasons, years, even decades. A fan had to keep inviting her favorite show back in.” This relationship created an intense feedback loop between that fan and the show’s creators — “a sadomasochistic intimacy that both sides craved and resented,” as Nussbaum describes it — that only intensified with the immediacy of the internet.

But the models have changed in multiple directions, she argues, from the style of production and the format of delivery, to the introduction of the pause button, which “helped turn television from a flow into text, to be frozen and meditated upon.”

Now, Nussbaum writes, “time itself has been bent.”"
Posted by Eric at 6:25 PM