The Return to Art Deco, Neo-Georgian and Neo-Gothic 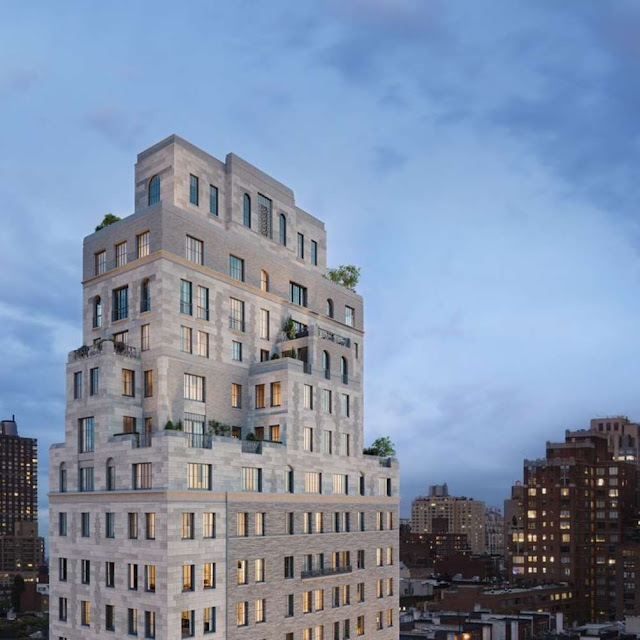 "After watching cutting-edge contemporary residential buildings by starchitects like Zaha Hadid, Jean Nouvel and Frank Gehry sprout across the city for years, many developers and designers are now looking in the rearview mirror for inspiration. Rather than trying to develop buildings with contorted forms or monastic minimalism, they are aiming to evoke the romantic glow of New York’s past with new buildings that recall Art Deco, neo-Georgian and neo-Gothic style.

The activity isn’t limited to the Upper East and Upper West Sides, which have long been bastions of prewar style, either. New residential towers that riff on the grandeur of the city’s storied past — but include all the conveniences and amenities that 21st century buyers of new developments expect — are now rising everywhere from Morningside Heights to the financial district.

William Sofield, the founder of Studio Sofield, sees the activity as part of a broader trend that is bringing renewed interest to artisanal, handcrafted goods of all sorts, from hand-stitched leather handbags to bespoke, workshop-made lighting and furniture.

“It became this huge obsession, across the board, of things having quality, and things being handmade,” he said. “All of a sudden, glass towers felt cold, icy, alien. People went back to these things that had material quality to them.”

Compared to glass skyscrapers, Mr. Stern mused that his masonry buildings appeal to buyers because they look decidedly different from office towers and are eminently livable.

“You have walls between the windows so that in your apartment you can hang a picture,” he said. “Or, should you be one of those ancient people who still has books, you can have a bookcase.”

“We are the radical architects,” he said. “We are the architects who draw by hand as we design buildings, who look to the past for formal inspiration and who use wonderful materials, wherever possible, like limestone or brick.” "