Justice League of the Sea 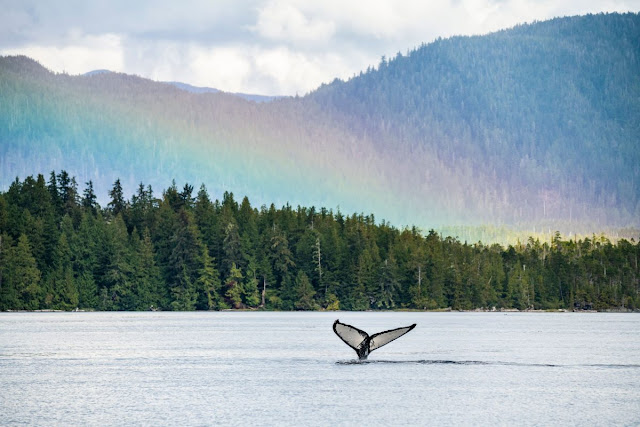 "Humpbacks are known to swoop in and disrupt a killer whale hunt, sometimes pulling a targeted seal or sea lion pup safely onto their belly with one of those pectoral fins. You could call them the ocean’s Justice League. “You know how you put your own oxygen mask on first before assisting others?” says Fred Sharpe, a research biologist with the Alaska Whale Foundation who has been studying the species for over 30 years. “Humpbacks aren’t like that. They just wade right in to help those in need, as if they can’t help themselves.”

The truth is, however, that “nobody on Earth knows how baleen whales find their food,” Hildering says.

How long do they live?

“We haven’t had enough time to figure out how long they can live,” Hildering says.

Why do they sing?

Hildering leans close. “We’ve been studying the question for over 40 years and still nobody knows why humpbacks sing.”

Payne called humpback song “the most evocative, most beautiful sounds made by any animal on Earth.” And NASA apparently agreed. Aboard the Voyager 1 and 2 probes, launched in 1977 and now soaring through deep space, is the calling card of our planet: a golden record of a soundtrack from the third rock from the sun. Interspliced with greetings from UN diplomats, along with other natural sounds—thunder and crickets and the sound of a kiss—are songs of the humpback whale. In our only deliberate attempt to represent Earth to extraterrestrial beings, we gave humpback whales a status equivalent to our own. Which is not so far off Indigenous perspectives of humpbacks. To the Indigenous people of northern Vancouver Island, for example, humpbacks are the record keepers, repositories of ancient wisdom, swimming libraries. But in the Eurocentric telling, the story of humpbacks has been completely reversed. Two centuries ago, they were monsters. Half a century ago, they were hamburger. Now they are the ocean’s mystical elders. Not like us: in some ways better than us.

In October 2017, marine biologist Nan Hauser was filming a humpback in the Cook Islands when it seemed to turn on her, nudging her roughly back toward her boat. She climbed to safety, the only blood on her from scrapes from the barnacles that cling to humpbacks. Only then did she see the tiger shark. She’s convinced the humpback was saving her life. “I’m a scientist, and if anyone told me this story, I wouldn’t believe it,” she says. Having been scooped from the path of a tiger shark may produce a forgivably rosy view of humpback altruism, but scientists are inclined to explain such behavior in terms of an instinctive protective response against any predator that might hurt a baby humpback."
Posted by Eric at 1:58 PM