New York Times – "The America’s Cup Is Now an Action Movie"
"He honed his skills avoiding trees and power lines as a crop duster before moving into film production, where his work has included capturing overhead scenes for the “Lord of the Rings” series. When his helicopter is not chasing sailboat races, it leads a much quieter life: flying charters, shooting aerial video and ferrying clients to lunches, golf courses and heli-fishing trips.

During an America’s Cup race, the amount of information Monk must track while in the air is substantial, and constantly changing. His flying must remain within the safety guidelines of the model of helicopter he uses. He cannot fly into the airspace of the other TV helicopter overhead, which provides the wider image — often overlaid with graphics — that allows viewers to track the boats on a course marked up like a football field. (That video is shot by Monk’s son, Blair.)"
...
"Why helicopters? Drones were originally considered for the job but were quickly scrapped as the weight of the camera equipment added up. “Pretty quickly you end up in the position of having a drone the size of a dining table up there,” said Leon Sefton, director of production for the America’s Cup.

Besides, Sefton and his team prefer Monk as their living, breathing eye in the sky. Since Monk is right there, Sefton said, he has a spatial awareness that a drone pilot working remotely would not.

“The race yachts can sometimes do what seems to us to be unpredictable things,” he said." 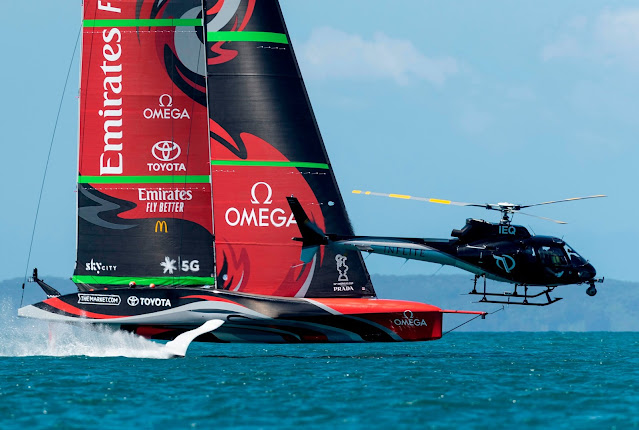