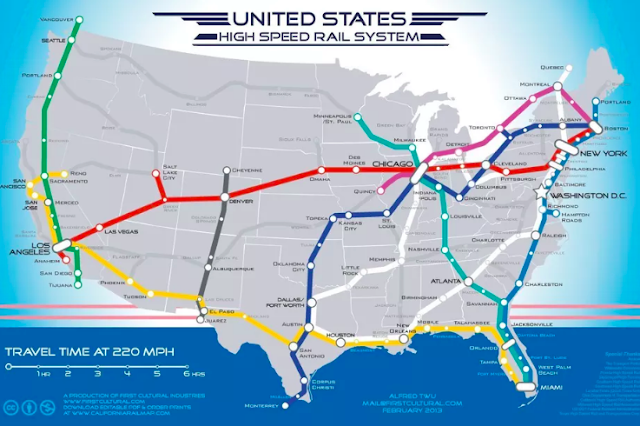 "High-speed rail infrastructure exists across Europe and Asia, where publicly owned and maintained tracks can connect passengers from Beijing to Hong Kong in nine hours, or Madrid to Barcelona in under three hours. In the United States, there is currently one high-speed rail line — arguably. Amtrak’s Acela Express, which runs through the Northeast Corridor from Boston to Washington, DC, can reach speeds of 165 miles per hour, but frequently runs at an average of 70 miles per hour between those cities.

Even with America’s resident Amtrak champion, Joe Biden, now in the White House, and the administration preparing a $2 trillion green infrastructure proposal, a network like the one in Twu’s map is at best decades away. To get there, the US would have to overcome a number of obstacles, from Republican and corporate opposition to a dearth of expertise. Perhaps most importantly, it would require a level of federal commitment — both budgetary and planning-wise — the likes of which have not been seen in generations.

The map, then, represents Gen Z’s ambitious, sincere wish — for a more connected, more sustainable future — and their inherent recognition of how impossible the dream of high-speed rail may be."

"“I love the high-speed rail map image because I think a lot of urban planning and urbanism today, especially in the United States, is so devoid of inspiration because it’s so beaten down by so-called pragmatism, labor costs, legal issues, things like that,” said Jonathan Marty, a Numtot administrator who goes to Columbia University. “The high-speed rail thing, the map that circulates a lot, it touches people because it’s this genuinely bold and tangible image of the future. People can feel that.”

In addition, high-speed rail is a blunt example of just how behind the US is. After the 2008 global financial crisis, China, in particular, made massive investments into high-speed rail, building over 15,000 miles of rail lines that service more than 1.7 billion passengers yearly, according to the World Bank. And the high-speed TGV in France, for example, goes 200 miles per hour.

“At that speed, you could get from New York City to Chicago in about four hours,” Juliet Eldred, a Numtot co-founder and transit planner, said. “The current train is about 20 hours. That makes me viscerally enraged.”"