New Yorker – "The Unlikely Rise of the French Tacos"

"French tacos are tacos like chicken fingers are fingers. Which is to say, they are not tacos at all. First of all, through some mistranslation or misapprehension of its Mexican namesake, the French tacos is always plural, even when there’s only one, pronounced with a voiced “S.” Technically, the French tacos is a sandwich: a flour tortilla, slathered with condiments, piled with meat (usually halal) and other things (usually French fries), doused in cheese sauce, folded into a rectangular packet, and then toasted on a grill. “In short, a rather successful marriage between panini, kebab, and burrito,” according to the municipal newsletter of Vaulx-en-Velin, a suburb of Lyon in which the French tacos may or may not have been born.

“France is a country that, for decades now, has been urban, industrial, and diverse,” Loïc Bienassis, of the European Institute for the History and Cultures of Food, told me. “The French tacos is a mutant product, France’s own junk food.”

The trade publication Toute la Franchise recently declared that “the French tacos is without a doubt the product that will drive the market for dining out for the next ten years.” Chain restaurants have proliferated: New School Tacos, Chamas Tacos, Le Tacos de Lyon, Takos King, Tacos Avenue (which used to be called Tacos King before a trademark spat broke out). 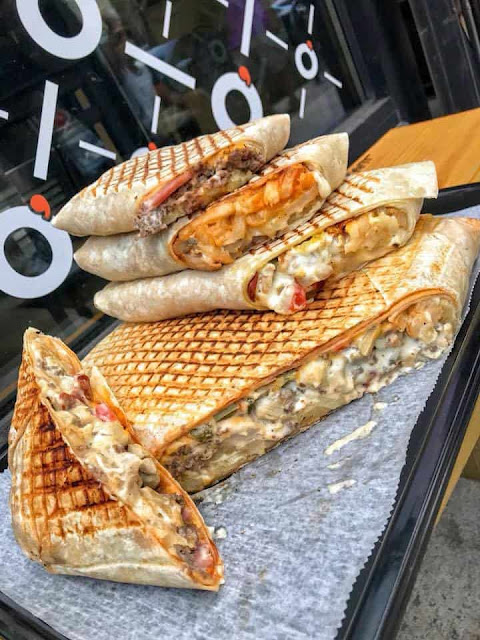 In 2007, Patrick Pelonero was working as a drywaller in Grenoble. He often ate French tacos for lunch, so, during the construction off-season, he took thirty thousand euros in savings and opened a French-tacos shop. Eventually, he joined up with a pair of childhood friends to create O’Tacos, which now has two hundred and thirty locations in France. Pelonero had never been to Mexico, still hasn’t. “But I’ve watched a lot of series about tacos on Netflix,” he said, speaking from Dubai, where he currently lives. (In 2018, the Belgian investment fund Kharis Capital acquired a majority stake in the brand.) Pelonero likens the French tacos to the iPhone. “One day it wasn’t there, and the next day it was, and nobody knows how they lived without it,” he said. "
Posted by Eric at 11:07 AM