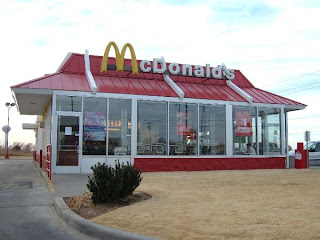 Bloomberg Businessweek - "Why the McWrap Is So Important to McDonald's"

"After lengthy discussions with produce suppliers around the country, [Executive Chef and VP of Culinary Innovation Dan] Coudreaut managed to add one new ingredient to the McDonald’s arsenal: the English cucumber. That might not seem like a big change, but when the chain added sliced apples to its menu, it immediately became one of the largest buyers of apples in the country. The company had to build up reserves of edamame before it introduced its Asian salad. Coudreaut would like to add guacamole one day. Who knows what that would do to the avocado supply?"
Posted by Eric at 5:52 PM