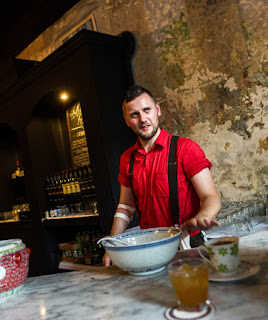 "When 22,000 bartenders, distillers, industry reps and cocktail enthusiasts gathered in New Orleans last week for the 11th annual Tales of the Cocktail convention, one truth emerged: punches are back. Gin punches complemented sour flavors. Whiskey punches swirled with citrus. Nearly every event featured a bowl at the bar that was regularly drained and refilled. At the Absolut Welcome Party, 16 rooms of the French Quarter’s historic Arnaud’s Restaurant were transformed into a maze of bespoke bars and boîtes, featuring punch-bowl fountains of such classic concoctions as the sea breeze, the corpse reviver and the honey pot. And at the closing day’s annual Pig & Punch fund-raiser, herbaceous Jagermeister and Barenjager Honey Liqueur punctuated flowing bowls of tequila and plum-wine punch.

The colonial-era precursor to the cocktail has been enjoying a renaissance ever since the release of the cocktail historian David Wondrich’s 2010 book, “Punch: The Delights (and Dangers) of the Flowing Bowl.” Typically comprised of five ingredients (spirit, citrus, sugar, spice, water), punches have grown in popularity in part because of their low-maintenance preparation — all that’s required before serving is floating a giant ice cube in a massive bowl."
Posted by Eric at 8:44 AM