"The most polarizing figure in the NBA" 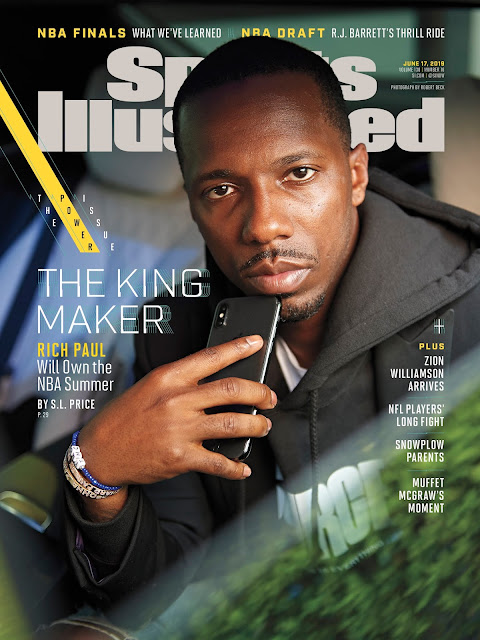 Sports Illustrated – "The King Maker: Why Rich Paul Will Own the NBA Summer"

"Turning point. The standard Rich Paul story has its cinematic hinge moment: In the spring of 2002, Paul was about to board a flight to Atlanta at Akron-Canton Airport when the 17-year-old James, traveling with friends to the Final Four, spotted him wearing a vintage Warren Moon jersey. They got to talking. Plane landed, and at baggage claim Paul directed James to his supplier, the Atlanta memorabilia store Distant Replays, and told him to drop his name. A friendship struck, a career made.

The Moon jersey is the tale’s talisman: What if Paul had opted for a Fran Tarkenton? Or no jersey at all? But just as important is what happened later that night in Atlanta. A friend gained Paul entry to Sean (Puffy) Combs’s roped-off section at Club Kaya; a member of James’s posse saw him there and figured—wrongly—that he must carry serious clout in hip-hop culture.

Days later Paul was home on his couch in Cleveland when Distant Replays called to say that Paul’s new pal was in the store, buying a 1987–88 Magic Johnson authentic jersey. And in retelling the legend yet again, Paul’s eyes widen and he hits the emphasis button. “LeBron’s buying Magic’s jersey. How crazy is that?” he says. “It all comes back full circle, right?”

But something about the fairy-tale nags. “It’s all random,” Paul says. Yes, he was only 21 then. But he’d also bought his first house at 19, persuaded Distant Replays owner Andy Hyman to tutor him on the business, and at the time was making so much—up to $10,000 on a good week—selling vintage jerseys out of his car trunk that he was scouting Cleveland malls for a spot to open his own store. Hyman estimates that he’d been approached by at least 100 others, “but Rich really did stick out.”

“He was willing to put whatever it took to be a success, and convinced me that he was worth investing my time,” Hyman says. “He doesn’t take no for an answer.”"

"Money used to be the primary marker of that power, but with the advent of the rookie wage scale in 1996 and ensuing restrictions on max salaries, the expression of clout—and of an agent’s skill—shifted.

“That changed the perspective,” Tellem says. “If the salaries are roughly similar, what can a player control? It’s no longer financial. Where he has his say, then, where he has some control, is in the choice of where he plays and with whom he plays.”"
Posted by Eric at 9:59 AM