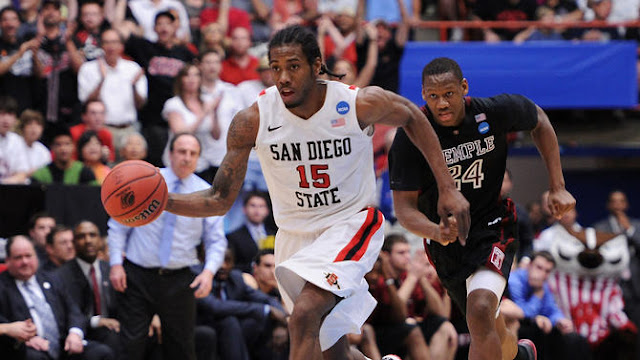 ESPN – "Who is Kawhi Leonard?"
By Tim Bontemps

"When he was working out at San Diego State in 2010, between his freshman and sophomore seasons, he got word that Ariza -- then firmly entrenched as an NBA player, and already having won a title with the Los Angeles Lakers -- would be working out on campus.

So Leonard sought out Ariza, who had come to work out with his trainer, former Aztecs guard Tony Bland, and asked to take part. Ariza agreed, and found himself immediately impressed with how Leonard handled himself.

"Man, my first impression of him was, 'This kid is here to work, period,'" Ariza told ESPN with a laugh. "No matter what."

That summer in San Diego, Ariza was putting in plenty of work. Every day, he would get in the gym twice -- once early in the morning, and then again in the evening. It was a grueling schedule, one Ariza thought would put him above and beyond anyone else.

There was only one problem: Leonard.

"I prided myself on being there first person in all the time," Ariza said. "And, when I got there, he was already there. He'd done everything he needed to do, and he was ready to work out again. ... When I saw the work ethic he had, I knew he was going to be special."

Leonard was motivated to show up early to test himself against an NBA player. And Ariza wasn't just any NBA player. He was someone Leonard respected -- but also someone who didn't overwhelm the young forward on the court.

"Trevor was big for me in college," Leonard said. "Playing against him, I just felt like I held my own at the time.

"He was winning one-on-one drills that we were playing. He didn't win them all, but he wanted to," Ariza said with a laugh. "He went as hard as he could every single time. ... He has that edge to him that you need to be the caliber of player that he is.""