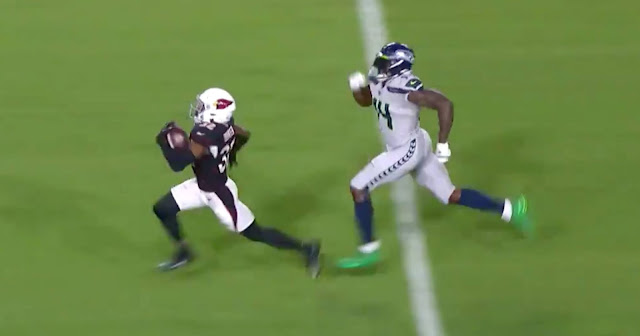 Seattle Times – "'Why y'all wait this long?' The Seahawks know they were fortunate to draft DK Metcalf, and the feeling is mutual"

"The Seahawks’ good fortune is obvious to anyone who has paid even casual attention to the team since the start of the 2019 season: Metcalf is a star. He’s a frickin’ megastar. He’s the most physically gifted wide receiver the Seahawks have had — with all due respect to Hall of Famer Steve Largent — and as talented and entertaining as any receiver in the NFL today.

So, yes, Schneider was blessed to select DeKaylin Zecharius Metcalf with the 64th overall pick in 2019, after 31 teams had a chance to draft him. They all had their chance, and they passed. Schneider, actually, had earlier opportunities to draft Metcalf — and he passed, twice.

Wilson has taken on the role of big brother to DK Metcalf, and Wilson believed in Metcalf as much as anyone early on. After just two training-camp practices last year, Wilson declared that the rookie receiver had the potential to be “a Hall of Fame-type player.” What sounded like hyperbole might turn out to be prescient.

It’s easy to get carried away daydreaming about what a long-term success Wilson to Metcalf could look like. Wilson has taken that sentiment to another extreme, saying he wants to build a legacy with Metcalf that becomes synonymous with Joe Montana and Jerry Rice. And Wilson has said he wants to break the Peyton Manning-to-Marvin Harrison record for quarterback-to-receiver touchdown passes of 114."

Seattle Times – "DK Metcalf on verge of breaking Steve Largent’s record from 1985. What does Hall of Famer think? ‘Go 14!’"