"I like paying taxes. With them I buy civilization."
-Justice Oliver Wendell Holmes 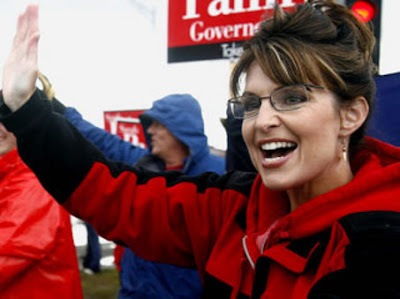 This was quoted from New York Times' Thomas L. Friedman's (author of The World is Flat) column this morning. His column, titled Palin's Kind of Patriotism, was one of the first critiques of Vice Presidential nominee and Governor Sarah Palin that I thought hit it completely on the mark. Check out an excerpt of the beginning below.
Criticizing Sarah Palin is truly shooting fish in a barrel. But given the huge attention she is getting, you can't just ignore what she has to say. And there was one thing she said in the debate with Joe Biden that really sticks in my craw. It was when she turned to Biden and declared: "You said recently that higher taxes or asking for higher taxes or paying higher taxes is patriotic. In the middle class of America, which is where Todd and I have been all of our lives that's not patriotic."
What an awful statement. Palin defended the government's $700 billion rescue plan. She defended the surge in Iraq, where her own son is now serving. She defended sending more troops to Afghanistan. And yet, at the same time, she declared that Americans who pay their fair share of taxes to support all those government-led endeavors should not be considered patriotic.
I only wish she had been asked: "Governor Palin, if paying taxes is not considered patriotic in your neighborhood, who is going to pay for the body armor that will protect your son in Iraq? Who is going to pay for the bailout you endorsed?If it isn't from tax revenues, there are only two ways to pay for those big projects - printing more money or borrowing more money. Do you think borrowing money from China is more patriotic than raising it in taxes from Americans?" That is not putting America first. That is selling America first.
Friedman later goes on to say...
How in the world can conservative commentators write with a straight face that this woman should be vice president of the United States?
Read the full column over at nytimes.com
Posted by Eric at 6:04 PM