The Gaudi NYC Skyscraper That Almost Was 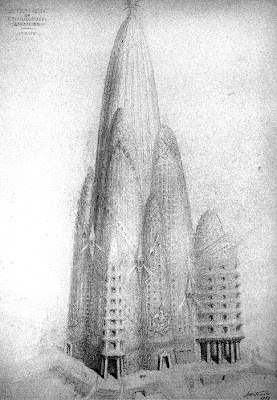 "In May 1908, Edward T. Carlton, an American hotelier, and William Gibbs McAdoo, the president of the New York and New Jersey Railroad Company, traveled to Spain to meet with the renowned Spanish architect, Antoni Gaudi (1852-1926) studied architecture in Barcelona, where he was surrounded by neo-classical and romantic designs. Gaudi became famous by reinterpreting these designs and working in the Art Nouveau and Art Moderne styles, and Sagrada Familia in Barcelona is considered to be his greatest work.

Carlton and McAdoo sought to add a building based on Gaudi’s unique vision to the New York City skyline. He was asked to design a hotel that would be situated in Lower Manhattan. Gaudi designed multiple sketches of an 980 to 1,100 foot high hotel called the Hotel Atraccion (Hotel Attraction). It contained an exhibition hall, conference rooms, a theater, and five dining rooms, symbolizing the five continents. Had the hotel been built, it would have been the tallest building in New York City, and therefore in the United States. Sadly, this building would never be built. Carlton wanted the hotel to serve the City’s wealthiest and most elite clientele. Gaudi’s remained true to his communist ideals, and he abandoned the project. According to another version of the story, Gaudi fell ill in 1909 and that brought about the end of the project. All that survive are conceptual sketches by Juan Matemala."
untapped New York - "The New York City that Never Was: Part I Buildings"
Posted by Eric at 7:28 AM