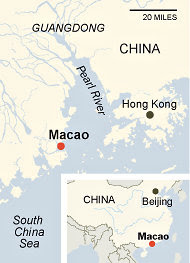 "The fight is playing out in Las Vegas, where Wynn Resorts is based, and here in Macao, the former Portuguese seaport colony now controlled by China, where annual gambling revenue is four times that of the Las Vegas Strip. Macao (often spelled Macau) was the source of all of Wynn Resorts’ $613.4 million in profit last year — more than offsetting its money-losing properties in the moribund Nevada economy."

New York Times - "Builders of Casino Empire Split, and the Bitter Accusations Fly"
Posted by Eric at 10:42 AM