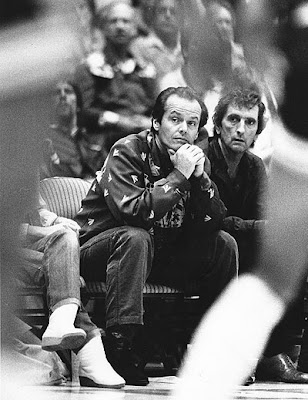 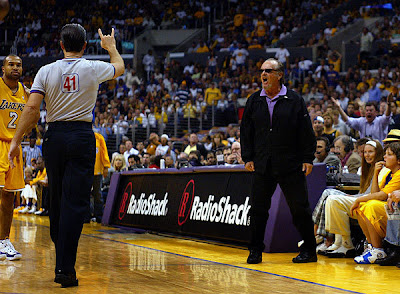 I don't know what sparked the occasion, but over the weekend the Los Angeles Times posted a slideshow of some of the more memorable moments of longtime (at least 30 years+) Los Angeles Laker courtside ticket holder actor Jack Nicholson.
LATimes - "Jack Nicholson courtside through the years photo gallery"
Semirelated,
The New York Times posted a feature a couple weeks ago on a recent documentary that analyzes the meaning of Stanley Kubrick's The Shining (that starred Nicholson).
New York Times - "Cracking the Code in ‘Heeere’s Johnny!’ "

“Room 237,” the first full-length documentary by the director Rodney Ascher, examines several of the most intriguing of these theories. It’s really about the Holocaust, one interviewee says, and Mr. Kubrick’s inability to address the horrors of the Final Solution on film. No, it’s about a different genocide, that of American Indians, another says, pointing to all the tribal-theme items adorning the Overlook Hotel’s walls. A third claims it’s really Kubrick’s veiled confession that he helped NASA fake the Apollo Moon landings."