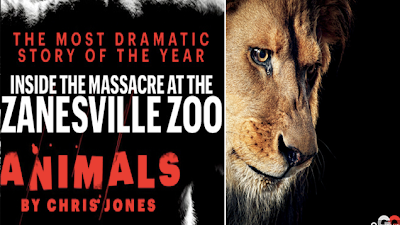 Both GQ and Esquire Magazines posted and will publish in their March issues (great) #longread features on the October 19 Zanesville, Ohio release of exotic animals and suicide that led to the killing of 50+ animals in less than 24 hours.
Gawker posted a story on how/why both magazines published features on the same story on the same day. If you have the time I recommend both.
GQ - "18 Tigers, 17 Lions, 8 Bears, 3 Cougars, 2 Wolves, 1 Baboon, 1 Macaque, and 1 Man Dead in Ohio"

"He and Red had taken only a few steps toward the barn when Kopchak saw something else, close by, just ahead of them on the other side of the fence. Just sitting there on the ground, facing their way. A fully grown male African lion.”
...
"Every human who interacts with an animal and then makes claims about what that interaction means to the animal—in backyards or zoos or even on the plains of Africa—is making a claim neither they nor anyone else can verify.”
- Chris Heath, GQ

“Soon after, electric warning signs began to flash beside I-70: CAUTION EXOTIC ANIMALS.”
...
Behind the house, by the fetid swimming pool, he found a mountain lion, sitting in the fading sun. He kept his shotgun pointed at the cat, and, he recalls, they came to an understanding: I won't bother you if you won't bother me. Blake went around the mountain lion and the rest of the house before he arrived back at his car.”
...
“Lawhorne clearly remembers her shoulder blades, like pyramids, pointing toward the night sky. She screamed in their faces, four feet away from them. They opened fire, the support officer pulling out his hand and falling back. That's when they turned with their lights and realized all the cages had been cut. The only thing between them and all those lions was air."