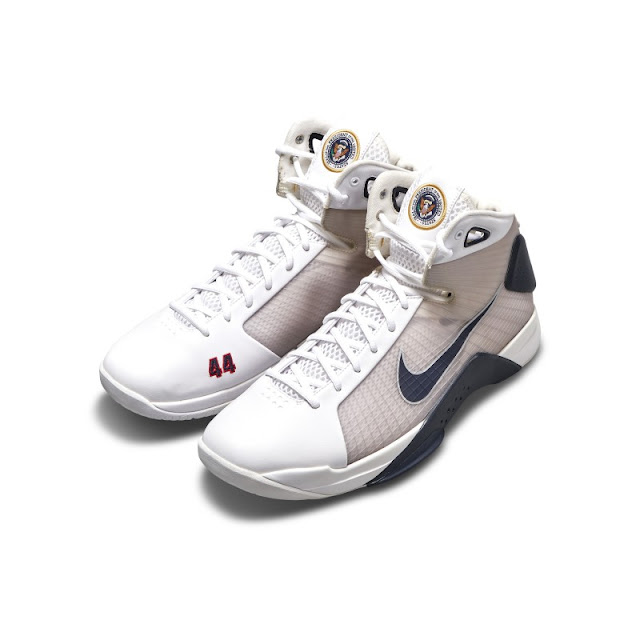 These deadstock Nike Hyperdunks are considered one of only two pairs in existence, with the other made for President Obama in 2009. They were designed exclusively for the 44th President of the United States. This particular pair was Nike’s only confirmation sample and have been kept in incredible condition over the last 12 years.

With President Obama’s well-known love for the game, a basketball shoe was the natural choice and the Hyperdunk was a fitting model as it was created for and worn by players on Team USA at the 2008 Beijing Summer Olympic Games. The style was part of the ‘United We Rise’ collection of USA Olympic sneakers.

Obama’s personalized Hyperdunk resembles the ‘United We Rise’ version with white leather uppers, blue Swooshes and visible Flywire technology. Custom details include the official Presidential Seal and embroidered ‘44’s to commemorate the 44th President of the United States of America. The insoles are printed with patriotic graphics including bald eagles with the date ‘1776,’ the year of America's founding.

The former President’s history with Nike dates back to his days on the J.V. and Varsity basketball teams at Hawaii’s Punahou School, where he won the state championship in 1979 wearing his Nike Blazers. Obama and Nike partnered in many ways, from political initiatives during Obama’s presidency, to last year’s $5 million donation by Nike to the Obama Foundation for the creation of a public space to promote physical activity at the planned Obama Presidential Center on the south side of Chicago.

Nike’s only confirmation sample of the Hyperdunks created exclusively for former President Barack Obama. Only two pairs in existence, the other made for Barack Obama in 2009.

The design is influenced by the ‘United We Rise’ Hyperdunk created for Team USA at the 2008 Beijing Summer Olympics. Official Presidential Seals on tongues.

‘44’ is embroidered in blue and red on the medial side of both toes representing the 44th President of the United States of America.

Visible Flywire technology, inspired by the engineering of suspension bridges.

This item is final sale and not eligible for return.
Posted by Eric at 5:10 PM