The Future of Video Meetings 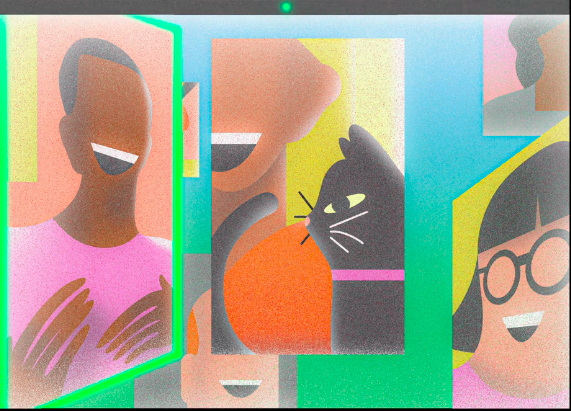 "It’s possible that some of this dislocation that Levine is talking about will slowly dissipate as technology evolves — hardware in particular. For all the advances in software and platforms over the past year, most remote workers are still largely limited by their laptop cameras and audio inputs, which are not usually state-of-the-art. Audio lags. Video is overexposed. It’s hard to suspend disbelief and feel as though you’re in the same room as someone who looks like a shadow half the time and sounds like a gremlin.

Virtual reality, which might have been expected to get one of the biggest boosts from the move to work-from-home, has actually been the focus of few new start-ups so far — most consumers simply don’t have the hardware to enable V.R. But that is likely to change. Right now we can reach only two senses — sight and sound — through the computer, but eventually we will be able to, if not actually get to the other three, produce proxies that are convincing enough. Having a drink with someone virtually could be as intoxicating as in the physical world.

By then, humans will have most likely progressed as well. The societal conditioning that currently tells us that meeting in person is superior, somehow more “real” than meeting online, is already fading. Boufarhat points out that the Hopin team has always been remote, and yet when he does meet employees in person for the first time, “I feel like I already know them.” The intensity of being in a fast-growing start-up together, whether virtually or physically, has a way of strengthening bonds. “Humans are extremely adaptable, and people have adapted to a cloud-first world,” says Garg, the investor. “In person is just a different way to get to the same end place of deep emotional connection.”"