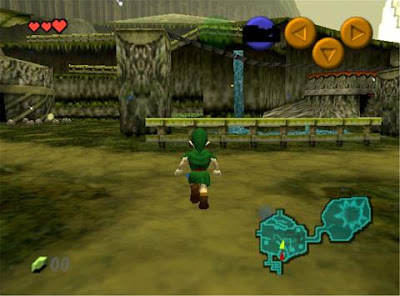 The Smithsonian American Art Museum is preparing 'The Art of Video Games' exhibit that will debut in March 2012.
Online users can visit the website and vote for the 80 games they think should be included, http://www.artofvideogames.org/.

"The Art of Video Games exhibition will explore the 40-year evolution of video games as an artistic medium, with a focus on striking visual effects, the creative use of new technologies, and the most influential artists and designers. We want you to help us select the eighty video games that will be represented in the exhibition. Remember, this is an art exhibition, so be sure to vote for games that you think are visually spectacular or boast innovative design!" 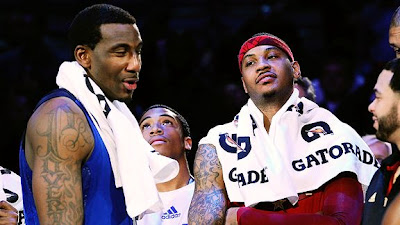 Wed, Feb 23 vs Milwaukee Bucks
Fri, Feb 25 @ Cleveland Cavs
Sun, Feb 27 @ Miami Heat on ESPN
ESPN - Michael Wilbon - The New York Knicks stepped up and got Carmelo Anthony. Here's how they might look
Posted by Eric at 12:14 AM No comments:

Black Mamba / All of the Lights 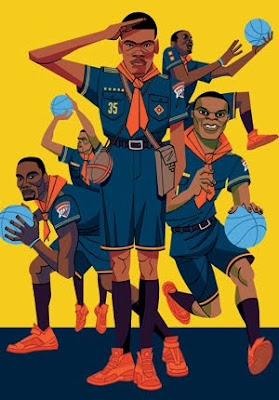 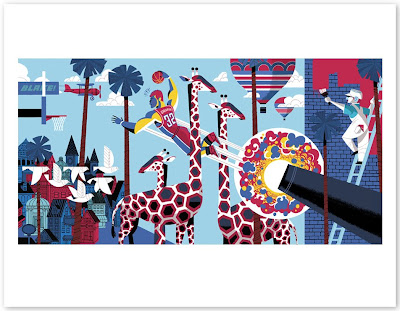 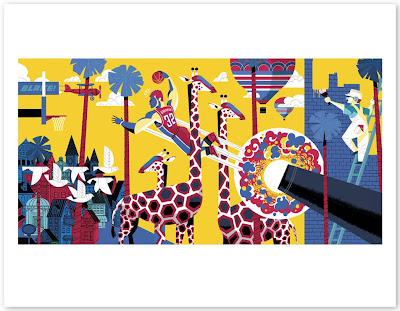 In the spirit of All-Star Weekend (3-Point and Dunk Contest tomorrow night, and All-Star Game Sunday) FreeDarko artist Jacob Weinstein has new pieces out - The Oklahoma City Thunder (part of a GQ story) and the Blake Griffin pieces commissioned by clothing line UNDEFEATED.
GQ - The NBA Golden Age - 26 Reasons Why This is the Greatest Season in Decades
Posted by Eric at 11:42 PM No comments:

Banksy is in Hollywood 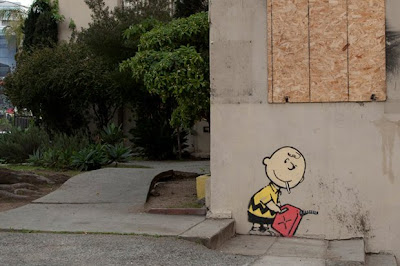 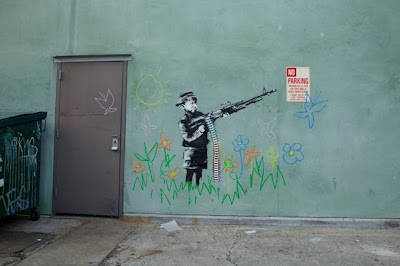 Banksy pieces have started to appear in Hollywood, CA. Hypebeast believes there are more to come.
Posted by Eric at 10:01 PM No comments: 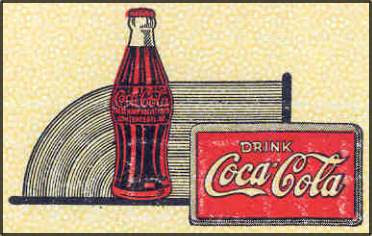 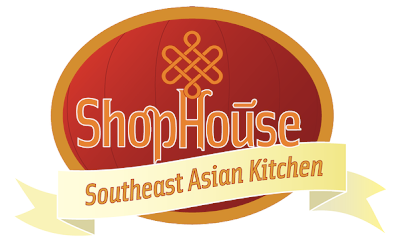 "Chipotle Mexican Grill Inc. has registered the name ShopHouse Southeast Asian Kitchen with the U.S. Patent and Trademark Office"
"developing an Asian fast-casual concept expected to debut this summer. The company has since provided few details about the project, saying only that it would be similar in pricing and service format to Chipotle, and would follow the chain’s “Food with Integrity” philosophy of using hormone-free meats, locally grown produce and organic ingredients where possible."

"Kalinowski speculated in his report that the food and flavors of countries such as Indonesia, Malaysia, the Philippines, Singapore, Thailand, Vietnam and others would “work well under the ShopHouse Asian Kitchen banner.” 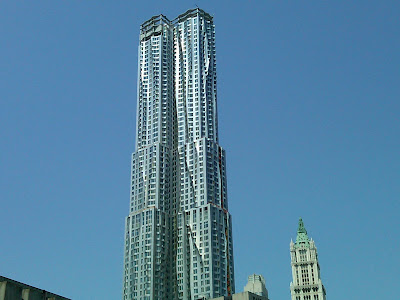 "...the finest skyscraper to rise in New York since Eero Saarinen’s CBS building went up 46 years ago."

"8 Spruce Street seems to crystallize a particular moment in cultural history, in this case the turning point from the modern to the digital age."
Wikipedia - 8 Spruce Street
More photos from the New York Times
Posted by Eric at 7:32 AM 1 comment:

The Making of The Game's "The Documentary" 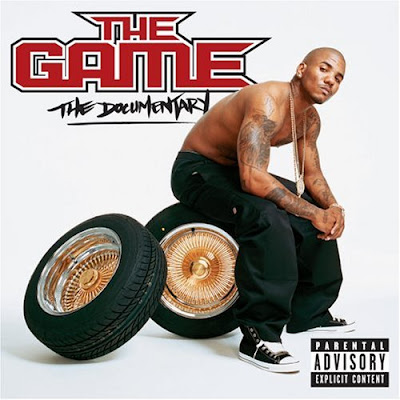 Complex - The Making of The Game's "The Documentary"
Brings back great memories.
Posted by Eric at 10:35 PM No comments:

""Deal-of-the-day" juggernaut" Groupon is facing controversey for their debut TV ads that ran before and during the Super Bowl last night. The creative, done by Crispin Porter & Bogusky, "feature celebrities solemnly intoning about a serious issue associated with social good — before segueing into a pitch for how the celebrity has used Groupon to save money."
The humor behind the ads is being supported by a Groupon microsite that is raising money for groups that are really helping the specific causes (Greenpeace, The Tibet Fund, RAN - The Rainforest Action Network).
SaveTheMoney.Groupon.com
Mashable - Groupon Responds to Super Bowl Ad Controversey

"Groupon classifies the campaign as “making fun of themselves” and says that offending customers was “the last thing [it] wanted.”

Regardless of intentions, customers are offended. The disconnect, it seems is that it is unclear from the advertising spots that Groupon is actually giving money to the causes it mocks. Most people can handle a good-natured parody of a Sally Struthers “Save the Children” ad, provided that at the end of the spot the viewer knows that the underlying cause is actually benefitting."

Volkswagen - "The Force"
Deutsch
Posted by Eric at 9:32 PM No comments: 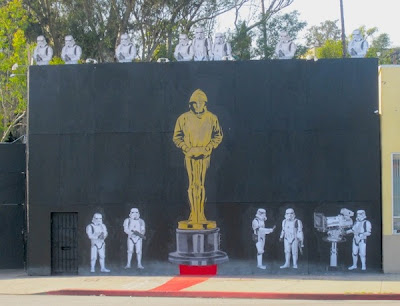 Not too long after 'Exit Through the Gift Shop' was nominated for this year's Academy Award for Best Documentary, "this large piece of street art showed up on La Brea at San Vicente, in the oft-used Mr. Brainwash space."
Will Banksy reveal his identity if the film wins?

“This is a big surprise,” [Banksy] states of the nomination. “I don’t agree with the concept of award ceremonies, but I’m prepared to make an exception for the ones I’m nominated for. The last time there was a naked man covered in gold paint in my house, it was me.”

Groupon
Buy: One 30-second spot secured at nearly the last second after another marketer pulled out. The social discount service has also bought time during the pre- and post-game activities.
Creative: To be determined
Agency: Crispin Porter & Bogusky

Below is another W+K ad. Heineken 'Open Your World' was created by the Amsterdam W+K office. Positive response in Europe has convinced Heineken USA to bring the ad to the United States this spring.
Posted by Eric at 8:58 AM 1 comment:

The Making of Black Swan

When asked how Christopher Nolan could possibly The Dark Knight, Wally Pfister (cinematographer of Batmin Begins, The Dark Knight and Inception) responded "I asked the same question. I read the script 2 weeks ago, and he’s done it. Plain and simple — he’s done it. It’s a phenomenal script. He’s still in the process of cutting it back because it’s a very long script right now, but it’s really phenomenal. And he actually had me go back and wanted me to watch, in IMAX, Batman Begins and The Dark Knight again. When I watched those I had read the script for The Dark Knight Rises and was like, ‘dude, it is a perfect trilogy.’ I think that was his intent, to work off those two pictures — and they are very different pictures."
The entire podcast interview can be found at Nolan Fans, where Wally also discusses working on Inception, the scouting of shooting locations "all over the world" for The Dark Knight Rises, Tom Hardy and Anne Hathaway's wardrobe (Catwoman).
Check out Nolan Fans, Wikipedia and SlashFilm for more rumors/news.
Posted by Eric at 11:27 PM No comments: