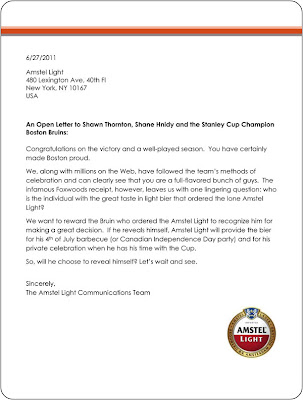 This morning my client, Amstel Light, sent out an open letter to the Boston Bruins congratulating them on their Stanley Cup victory, but asking the team the night they spent $157,000 out at a bar celebrating and ordering more than 147-some beers.......who ordered the lone Amstel Light?
Story made big sports news all-around today.
Darren Rovell (95,000 twitter followers) was the first to report.
Boston Globe - "So, which Bruin ordered the Amstel Light?"
Yahoo! Sports - "Which Boston Bruin player had the Amstel Light? Our suspects"
ESPN - "Amstel Light trying to solve mystery"
CBS Sports - "Amstel offers free beer to mystery Bruin drinker"
NBC Sports - "Which Boston Bruin ordered the Amstel Light? Beer company offers glorious reward for answer
The Sporting News - "After the Bruins' 156k bar tab, beer brand wants answers"
Deadspin - "The Search For the Pisswater-Drinking Boston Bruin Is On"
Vancouver Sun -"Bruins' light beer drinker gets free suds offer from brewery"
Posted by Eric at 8:52 PM No comments: 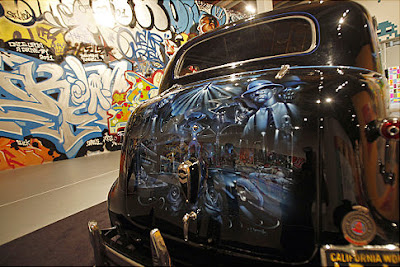 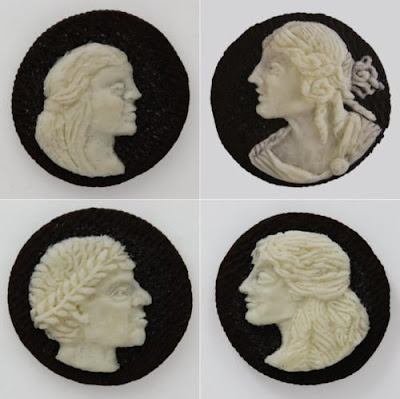 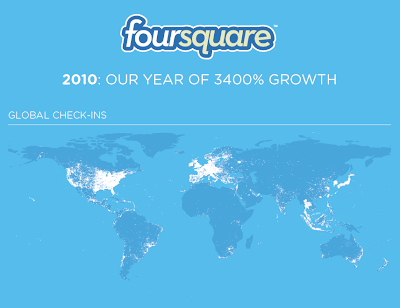 Click here to see the full infographic that includes the top train station, hotel, art gallery, music venues and top U.S. states for gym check-ins.
Foursquare, only two years old, has more than 10 million users worldwide. (not quite Facebook's 600 mill, Twitter's 200 or LinkedIn's 100, but still significant)
Posted by Eric at 7:41 AM No comments: 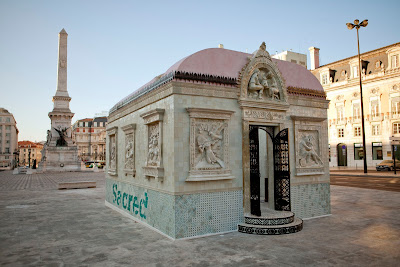 Brooklyn art-duo Faile's art installation, Faile Temple, was part of the Lisbon, Portugal 2010 Portugal Arte 10 biennial. Sadly, no longer in Lisbon.
Click here to the 43 detailed photos of the temple.

"The Brooklyn-based collective Faile's site-specific work seems to be the hit of the biennial. It's a shining ruin, an open-air dialogue between the sacred past and the secular present." 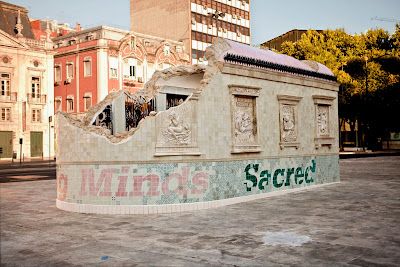 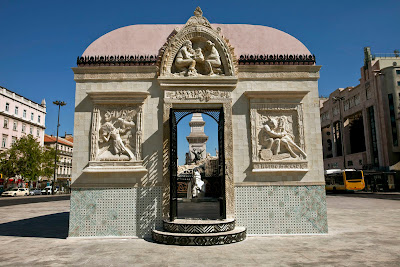 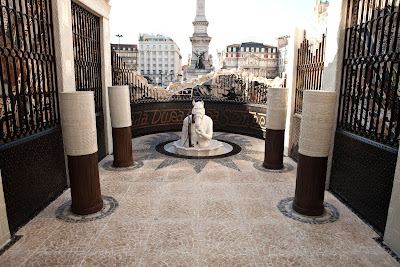 Population of the U.S. 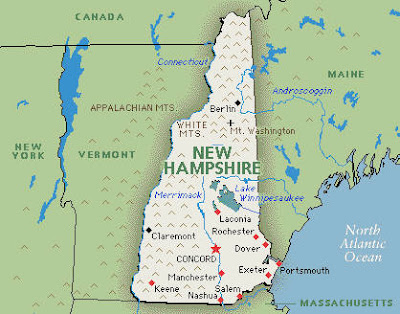 "A graphic designer named Shane Keaney recently calculated that if the entire American population was as densely settled as that of Brooklyn it could fit into the state of New Hampshire, leaving the forty-nine other states as open land."

-Nicholas Lemann
New Yorker - Get Out of Town
Posted by Eric at 10:09 AM No comments: 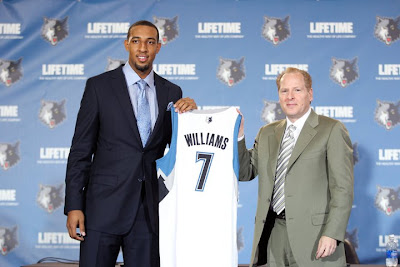 What to do when you're stranded at an airport for the night. (Dallas Fort-Worth International Airport - DFW)
Jalopnik - "Watch two guys run wild in an empty airport"
Posted by Eric at 8:12 PM No comments:

How did the Boston Bruins spend $157K? 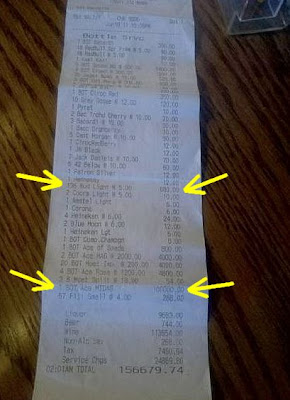 Based on the book by Michael Lewis.


1.2 million views.
From the Cheyenne Mountain Zoo in Colorado Springs, CO. This child will appreciate this awesome video when he or she is older.

Quote from HighIdeas & Tosh.O and not a bad question -

"Are there any zoos in africa? If they do exist, they must be filled with animals we think are normal. A zoo filled with dogs, cats, rabbits, deer, and groundhogs."

7.4 million views.
She's definitely getting some attention inside and out of eHarmony. I hope she got some replies.
Posted by Eric at 9:50 PM No comments: 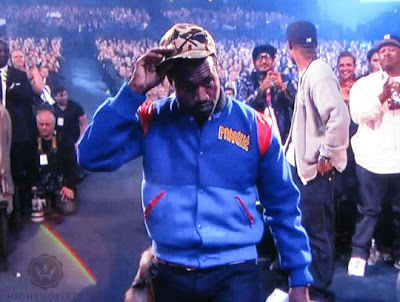 Kanye West - "Mama's Boyfriend"
Recorded in Hawaii during the MBDTF sessions. An old soulful beat reminiscent of The College Dropout days. It was either produced by Q-Tip or Soulja Boy.
Also,
Nas - "Nasty"
The first single of Nas' next album, Life is Good.
Posted by Eric at 6:50 AM No comments: 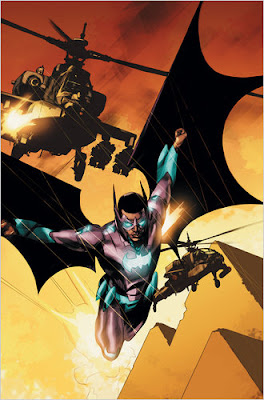 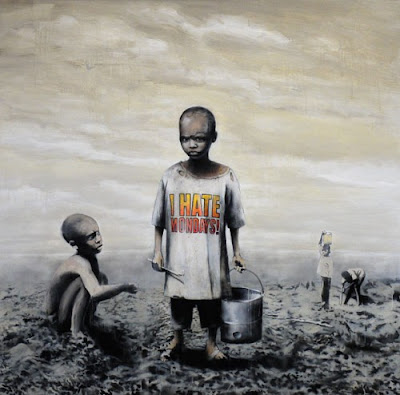 MOCA, The Museum of Contemporary Art, in Los Angeles will be doing free Mondays from now until August courtesy of Banksy as part of the Art in the Streets exhibit.
Posted by Eric at 9:33 PM No comments:

The Tree of Life 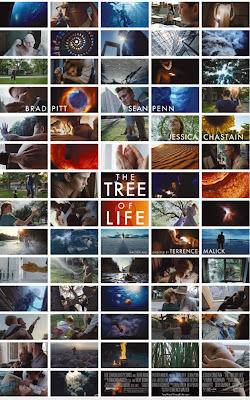 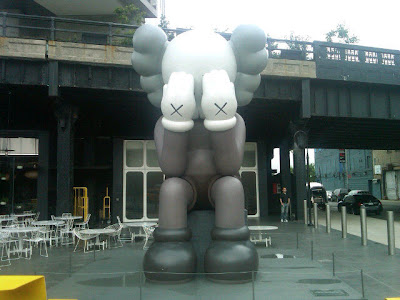 KAWS - Passing Through sculpture was erected the other night outside The Standard Hotel and the High Line where it will sit until October 2011.
New York Times - The KAWS Effect 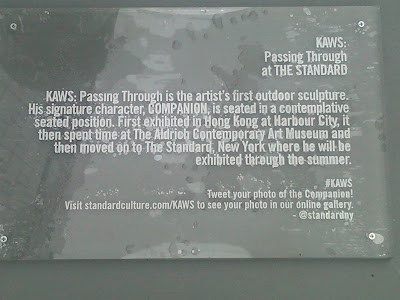 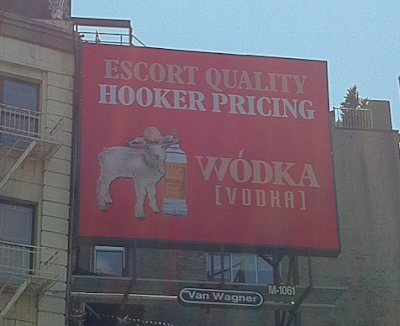 As tweeted by CNBC Sports Biz guy Darren Rovell.
Posted by Eric at 10:42 AM No comments: 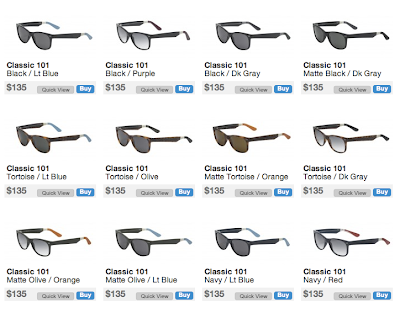 "For every pair of TOMS sunglasses purchased, "sight" will be given to a person in need whether it's through medical treatment, prescription glasses, or surgery."

Complex - TOMS Eyewear: One for One
CBS - TOMS Expands its One for One Vision
Posted by Eric at 10:35 AM No comments:

Song of the Summer? 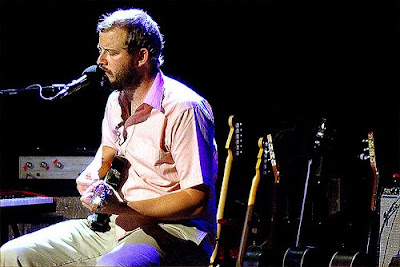 Stereogum - Download Bon Iver’s 10 Best Cover Songs
"Come Talk To Me"
"I Can't Make You Love Me" (Live on the Jimmy Fallon show)
"Your Love"
"Bruised Orange"
The second Bon Iver album, Bon Iver, Bon Iver is coming out June 21.
A great feature on the Eau Claire singer was published this week on NYT.
New York Times - Who, What and Where is Bon Iver?
Posted by Eric at 8:53 AM No comments:

Been obsessed with graffiti films since Exit Through the Gift Shop.

"Angered and frustrated by the sudden infatuation and commercialization of the graffiti movement, French street artist Kidult has taken to the streets of Paris in an effort to reclaim his craft. In a retaliation against major luxury labels, Kidult has tagged a string of stores in recent months that include colette, Agnés b., JC/DC and Supreme."

The Girl With The Dragon Tattoo (U.S.)