The World Cup is missing this

Lissie, a folk singer from Illinois, covers Kid Cudi's "Pursuit of Happiness."
Posted by Eric at 7:30 PM No comments:

From The World's Best Ever.
Posted by Eric at 7:23 PM No comments: 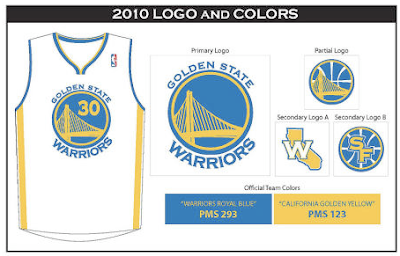 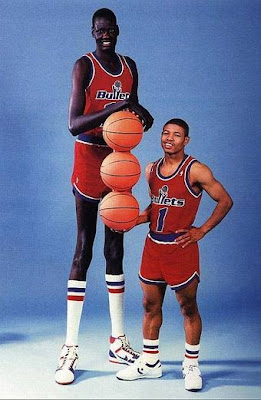 Rare footage.
Supposedly off A Good Ass Job.
Posted by Eric at 6:43 AM No comments:

If you've seen True Blood this is kind of funny.
Found at Nahright.com.
Posted by Eric at 6:41 AM No comments:

The UK's Guardian has reenacted the most exciting World Cup match so far USA 1, England 1 with LEGO's.
Posted by Eric at 6:56 AM No comments:

Clyde "The Glide" Drexler
I want to see Kobe go up like one of those.
The #1 dunk is unbelievable. From Clyde's rookie year. Click here to watch the whole play.
Posted by Eric at 12:19 PM No comments:

Official Synopsis:
“Boardwalk Empire” on HBO is from Terence Winter, Emmy Award-winning writer of “The Sopranos,” and Academy Award-winning director Martin Scorsese. HBO’s “Boardwalk Empire” TV series is set in Atlantic City at the dawn of Prohibition, when the sale of alcohol became illegal throughout the United States.
America in 1920. The Great War is over, Wall Street is about to boom and everything is for sale, even the World Series. It is a time of change when women are getting the vote, broadcast radio is introduced, and young people rule the world.
On the beach in southern New Jersey sits Atlantic City, a spectacular resort known as “The World’s Playground,” a place where rules don’t apply. Massive hotels line its famous Boardwalk, along with nightclubs, amusement piers and entertainment to rival Broadway. For a few dollars, a working man can get away and live like a king-legally or illegally.

Boardwalk Empire is slated to debut on HBO this fall. 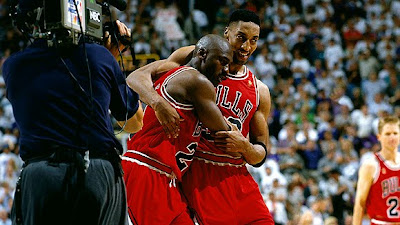 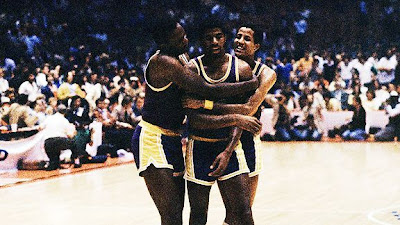 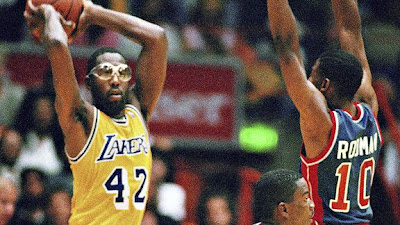 ESPN.com's John Hollinger has ranked the Top 50 NBA Finals performances of all-time (so far).
Click here to read his method and then begin reading the rankings.
Posted by Eric at 3:38 PM No comments: 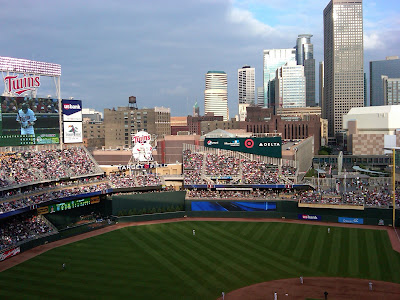 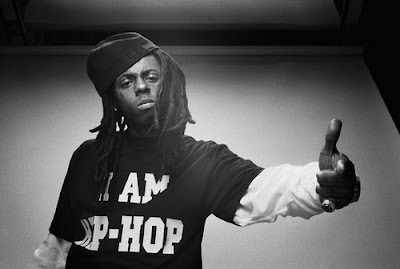 Lil Wayne - Over the Phone Freestyle "Light Up"

"Hate is temporary, love is necessary
I went from eating pussy to eating commissary
Damn I am addicted I need therapy
You can buy the answers but you can’t afford to question me
First off I don’t need you second guessin’ me
Jail is like third base I’m comin' home eventually
Still got shooters, like hot tubs
Man I'm anemic, still got blood
I’m in my cell readin’ fan mail
Wish I was in Amsterdam sippin’ Amstel
Thinkin’ ’bout all of that pussy I can’t smell
Man they did me wrong I feel like Nelson Mandel’
I shine too hard my lamp fell
But, my names still under Alexander Graham Bell
I know you meant damn ’cause you know Damn Well
That I still got you open open like a clam shell
Yeah still fly on my hawk shit
My conversation stinks ’cause I talk shit
Stay in your lane you’re on that double talk shit
We eatin’ at the top get a spoon and a fork lift
I got rap wrapped up like a gift
And I’d be sober if it was a fifth
I’m feelin’ like Elvis, Jailhouse Rock
I’m not Tupac I’m the New Pac
Behind bars but the bars don’t stop recordin’ over the phone
I hope the call don’t drop
Drizzy got the ball, I know the ball won’t drop
And I pray none of my kids never wanna be cops
Young Money get ‘em, Young Money got ‘em
We both got our feet up, vacation on an island
Yeah and tell your girls…
And even if you don’t smoke motherfucker you gon’ have to light up" 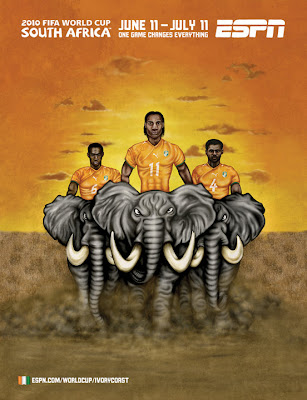 Created by the advertising firm Wieden + Kennedy for ESPN's World Cup coverage "One Game Changes Everything" campaign.
I've posted some of my favorites, Ivory Coast above. And then Switzerland, USA, Spain, Slovenia and Argentina.
Click here to see all 32 with explanations of the artwork.
Click here to learn more about Wieden + Kennedy's campaign. 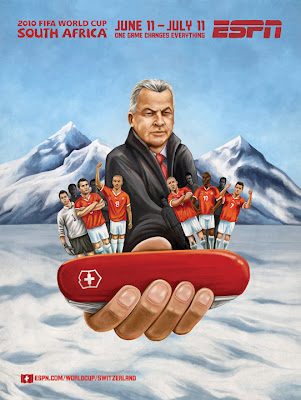 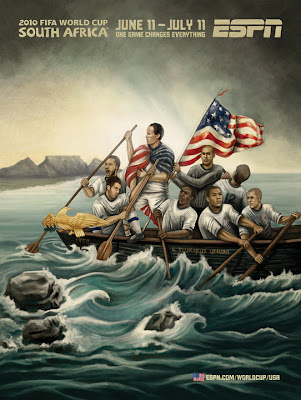 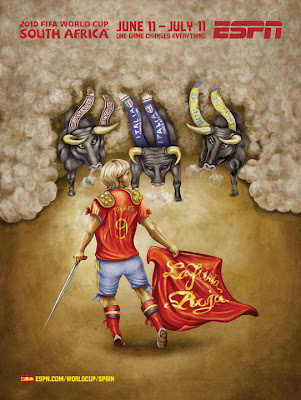 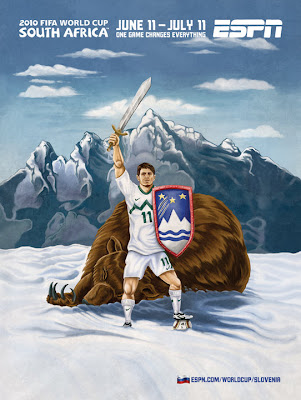 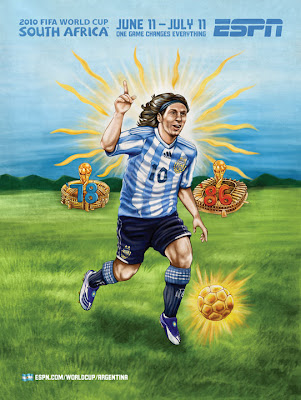 Drake - "9AM Freestyle in Dallas" 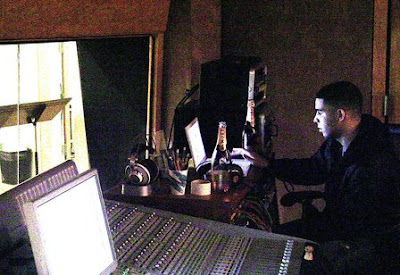 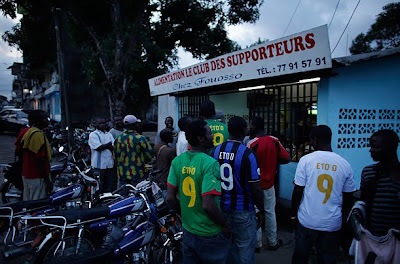 Cameroon striker - Samuel Eto'o, from TIME Magazine
An idol in Africa, where he's thrice been Footballer of the Year. He's in his third Cup, and he's a big-gamer: he's scored in two of his three Champions League finals.

The Global Game
"Italy, the reigning world champion by dint of its victory in the 2006 World Cup, takes soccer deadly seriously. The nation abounds with legendary clubs owned by extravagantly rich magnates who have spent the last 50 years luring the world's finest players with offers they cannot refuse. So where is today's highest-paid player in Italy from? Not from Brazil or Argentina, the planet's most prolific footballing factories; nor from France, Germany or Spain. Neither, for that matter, is he Italian. The player with the highest salary in Italy is a Cameroonian called Samuel Eto'o, the spearhead of an African contingent that has taken Europe's soccer citadel by storm.
Unlike many in the money-mad soccer world, or in banking, Eto'o has earned every penny. Three times African player of the year, Eto'o goes into the first World Cup on African soil as captain, and uncrowned king, of Cameroon, armed with a statistic that he alone owns: Eto'o is the first player ever to have won the treble of National League, National Cup and European Champions League — soccer's royal flush — with two different teams. And he has done it (the odds have to be mightily long on this happening again anytime soon) in successive seasons, the first with Barcelona and the second, in May, with Inter Milan." 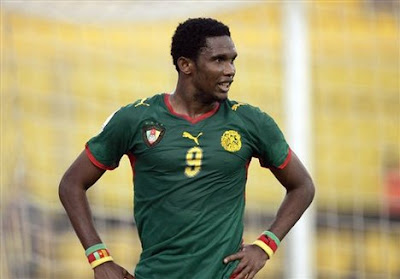 "Visually, Redemption is spectacular - you could easily just smoke a joint and watch Marston ride around the changing landscape, taking in canyons, buttes and rolling plains as orange sunrise morphs into purple sunset. Game engineers motion-captured horses to replicate their movement as accurately as that of the human characters. Rockstar built an ecosystem in which you can eat the wild plants, and wind and weather change randomly, affecting events as they unspool. Redemption used more than 500 voice actors and features 14 hours of original music broken into dynamic stems that respond to actions and events. The game even features the first-ever digital lasso, which is impressive because curved, fluid objects like rope where impossible to render on any game systems before PS3 and Xbox 360. Estimates put the game's development cost somewhere between $60 million and $100 million. (Rockstar has no comment on the budget.)"

Dock Ellis narrates his infamous 1970 no hitter.
Posted by Eric at 12:59 PM No comments: