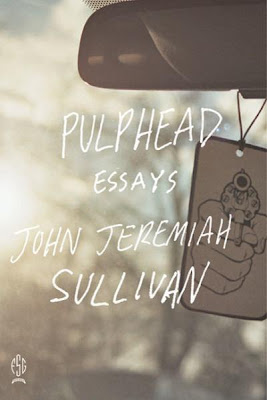 Two-time National Magazine Award winner and regular contributor to both GQ and The Paris Review John Jeremiah Sullivan published a dozen of his previously published essays (topics range from Christian rock festivals to Hurricane Katrina to Michael Jackson to the Real World to American Cave Art) in this compilation, Pulphead.

"[Sullivan] seems to have in abundance the storyteller’s gifts: he is a fierce noticer, is undauntedly curious, is porous to gossip, and has a memory of childlike tenacity. Anecdotes fly off the wheels of his larger narratives. In a touching piece about the near-death of his brother (who electrocuted himself with a microphone while playing with his band, the Moviegoers, in a garage in Lexington, Kentucky), Sullivan mentions, in passing, “Captain Clarence Jones, the fireman and paramedic who brought Worth back to life, strangely with two hundred joules of pure electric shock (and who later responded to my grandmother’s effusive thanks by giving all the credit to the Lord).” Any reporter can be specific about the two hundred joules. But the detail about Captain Jones giving all the credit to the Lord, while a small thing, suggests a writer interested in human stories, watching, remembering, and sticking around long enough to be generally hospitable to otherness."
- New Yorker review of Pulphead

If you're interested in reading one of Sullivan's essays before committing to the book, check out his New York Times story on traveling to Disney World with his wife, daughter and their mutual family friends (not included in Pulphead).
Posted by Eric at 12:08 PM