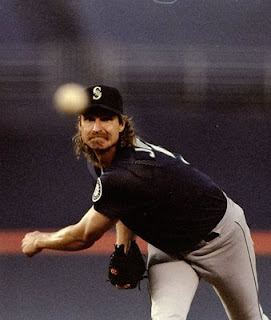 "[David] Epstein tells us that baseball players have, as a group, remarkable eyesight. The ophthalmologist Louis Rosenbaum tested close to four hundred major- and minor-league baseball players over four years and found an average visual acuity of about 20/13; that is, the typical professional baseball player can see at twenty feet what the rest of us can see at thirteen feet. When Rosenbaum looked at the Los Angeles Dodgers, he found that half had 20/10 vision and a small number fell below 20/9, "flirting with the theoretical limit of the human eye," as Epstein points out. The ability to consistently hit a baseball thrown at speeds approaching a hundred miles an hour, with a baffling array of spins and curves, requires the kind of eyesight commonly found in only a tiny fraction of the general population."
Posted by Eric at 5:06 PM