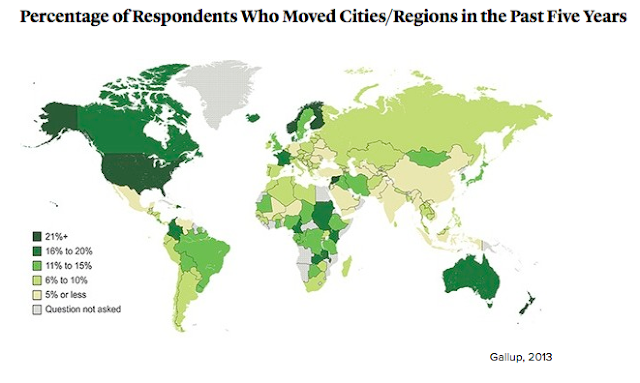 The Atlantic - "Why Do Americans Move So Much More Than Europeans?"

"From Manifest Destiny and the Gold Rush to Okies going west and the growers of the Green Rush, the seeking of distant opportunity, particularly for an immigrant nation, is part of a national mythology as well as a broader American fixation with work. A new working paper dissected by Ben Steverman at Bloomberg suggests that workers in the U.S. now “put in almost 25 percent more hours than Europeans” in a given year. This figure has steadily risen since the 1970s, when the hours logged by workers in Western Europe and the United States were roughly the same. (Meanwhile, every country in the European Union has at leastfour work weeks of paid vacation every single year, and 41 percent of Americans who have paid vacation days squander them.)"
Posted by Eric at 8:55 AM